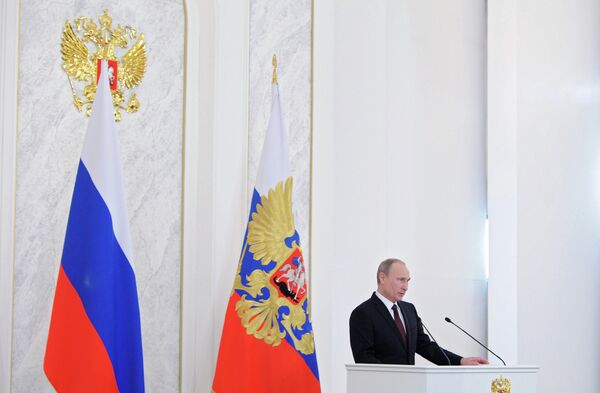 Around $111 billion of Russian money passed through offshore companies in 2012, equivalent to one-fifth of the nation’s exports, Putin said during his annual State of the Nation address.

Putin ordered the government to introduce legislation allowing Russia to tap tax revenues being lost to the budget by business’ extensive use of offshore companies. He also demanded a ban on state support for companies not registered in Russia.

“You’re welcome to use offshores – but the money needs to be [sent] here," he said.

Russian companies hold money abroad not only to take advantage of lighter tax regimes, but to avoid some of the risks of doing business in Russia, which experts say include an unpredictable business environment, non-independent courts and weak law enforcement.

Putin announced the start of a drive to “de-offshorize” the Russian economy during his State of the Nation address last year, but admitted Thursday that little progress had been made.

“I’ll say it directly, the results [of de-offshorization] haven’t been very visible,” he said.

“The income of companies registered in offshore jurisdictions and belonging to Russian owners… should be subject to our tax laws and their taxes should be paid into the Russian budget. We need to think of a system to seize this money,” he said.

The government is currently looking to maximize revenues as a slowing Russian economy has forced it to cut spending plans. The Russian economy is this year set to record its lowest level of growth since 2009.

Finance Minister Anton Siluanov told reporters after Putin’s speech that the “deoffshorization” of the Russian economy could provide the budget with “billions of rubles,” the Prime news agency reported.

The crackdown proposed by Putin, however, was criticized by former Finance Minister Alexei Kudrin.

“Unfortunately, in our conditions, the proposed de-offshorization measures are unlikely to reduce capital outflow. [But] they are correct in relation to state companies,” he said on his Twitter account.

Billions of dollars leave the Russian economy every year. In 2012, Russia recorded $56.8 billion in capital outflow, and officials expect that figure to reach about $60 billion this year.