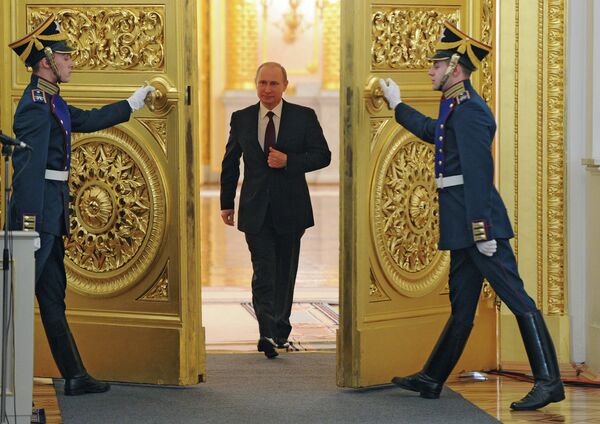 © RIA Novosti . Michail Klimenteev
/
Go to the photo bank
Subscribe
Russian President Vladimir Putin said Thursday that civil society should be more actively engaged in decision-making by government and parliament, but that NGOs should not be motivated by politically biased positions.

MOSCOW, December 12 (RIA Novosti) – Russian President Vladimir Putin said Thursday that civil society should be more actively engaged in decision-making by government and parliament, but that NGOs should not be motivated by politically biased positions.

All bills should be submitted to public review before reaching the State Duma, the lower house of parliament, Putin told a gathering of top officials at his annual State of the Nation address.

The proposal appears to signal the Kremlin’s desire to demonstrate it is engaging with the broader public rather than operating by diktat, although the cautiousness of Putin’s proposals suggest grassroots organizations will continue to be regarded with suspicion by authorities.

Important bills in Russia are already subjected to public discussion prior to filing, but the government is not obliged to react to proposals. Putin did not say how his proposals would change that procedure.

Putin said public councils should be created to monitor executive government bodies. Where such councils already exist, their influence on executives, including those at the federal level, should be enhanced, Putin said.

The Russian leader ordered that legislation be drawn up to regulate the issue. No timeframe was given, but Putin said nongovernment organizations and rights groups should be involved in its drafting.

Putin also said rights groups should get more support from the state, but only if they “are not involved in politics.”

This led to administrative crackdowns on many prominent rights groups, such as Memorial and electoral watchdog Golos, which accused Putin of rigging the 2012 presidential elections.