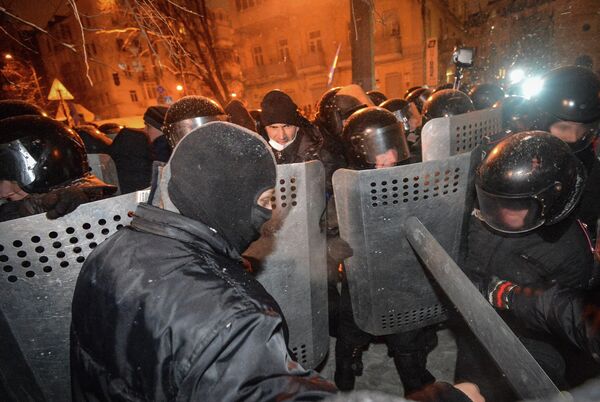 © RIA Novosti . Alexey Kudenko
Subscribe
The European Parliament said Thursday that Ukraine was able to hold early elections to find a way out of the country’s current political crisis.

MOSCOW, December 12 (RIA Novosti) – The European Parliament said Thursday that Ukraine was able to hold early elections to find a way out of the country’s current political crisis.

In a resolution adopted on Thursday, parliament members pointed to “the democratic possibility in any democracy to call new elections when renewed popular legitimacy is needed,” the legislature said in a statement.

The European lawmakers deplored Ukrainian President Viktor Yanukovych’s decision to suspend an association agreement with the EU, saying it was a “major missed opportunity.”

Ukraine unexpectedly put on hold preparations last month to sign landmark political and trade deals with the EU in favor of strengthening ties with Moscow.

Kiev said that European integration would have caused the country financial losses at this point in time. The decision sparked protests throughout the country.

The Ukrainian opposition and EU have accused Russia of putting economic pressure on Kiev not to sign the deals.

Moscow has vehemently denied that its trade embargoes and gas deliveries were a form of intimidation against Ukraine, saying Russia was only taking measures to protect its own economy.

Meanwhile, Ukrainian Prime Minister Mykola Azarov said Kiev would like to change the implementation terms of association and free-trade agreements with the EU.

The premier said a similar measure in Hungary led “to the complete destruction of sugar factories.”

He urged European partners to change the terms of the deal’s implementation to make them beneficial for Ukraine, the government said in a statement.

A diplomatic source in Brussels told RIA Novosti on Thursday that EU officials hoped the association agreement with Ukraine would be signed at a bilateral summit that could be held in spring next year.

The EU’s commissioner for enlargement and European neighborhood policy, Stefan Fule, said Thursday that he had agreed with Ukraine’s deputy prime minister, Serhiy Arbuzov, to draft a roadmap for implementation of an association agreement.

Updated with comments by EU officials.