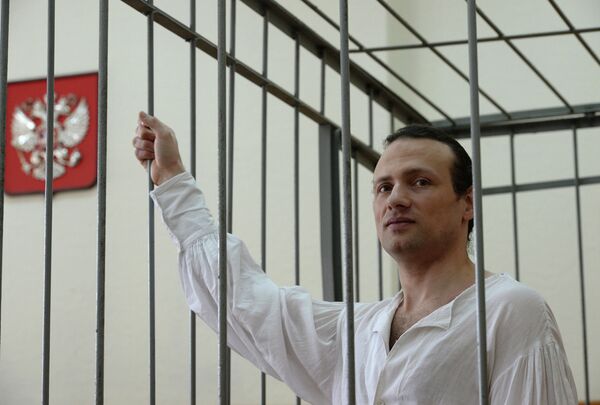 A regional Russian court on Wednesday halved a jail term for a former painter whose quest to bridge the class divide between the metropolitan intelligentsia and provincial dwellers resulted in bribery charges.

MOSCOW/ BELGOROD, December 11 (RIA Novosti) – A regional Russian court on Wednesday halved a jail term for a former painter whose quest to bridge the class divide between the metropolitan intelligentsia and provincial dwellers resulted in bribery charges.

The Tver Region Court on Wednesday canceled a seven-year maximum security jail sentence for 36-year-old Ilya Farber, ruling that he should instead serve three years in a maximum security prison and pay a fine of 3 million rubles ($90,000).

Farber’s lawyer Anna Stavitskaya told the RAPSI news agency that her client had already spent two years and nine months behind bars and the new sentencing makes him eligible for parole.

“In our legal system, such sentencing de-facto equals a not guilty verdict,” the lawyer said. “In my opinion, it is a compromise solution because there was insufficient evidence in the case.”

His actions were compared by media to those of the “narodniki” – intelligentsia activists who resettled in Russian villages in the late 19th century to aid and enlighten the peasants in a largely unsuccessful attempt to bridge the yawning gap between Russian urbanites and conservative countryside residents that persists to this day.

Last year, Farber was accused of taking a bribe in 2011 from a firm that he had contracted to renovate the village’s townhall, but that did not do a proper job. The total damage to the village budget stood at 940,000 rubles ($28,500), the verdict said.

Farber was sentenced to eight years in a maximum security prison in August 2012, but the sentence was reduced to seven years and one month upon retrial four months later. Both verdicts have been criticized by media as unexpectedly harsh.

The majority of convicted bribe-takers were spared jail time last year, while those put behind bars were to spend less than five years in regular prisons on average, according to Supreme Court statistics.