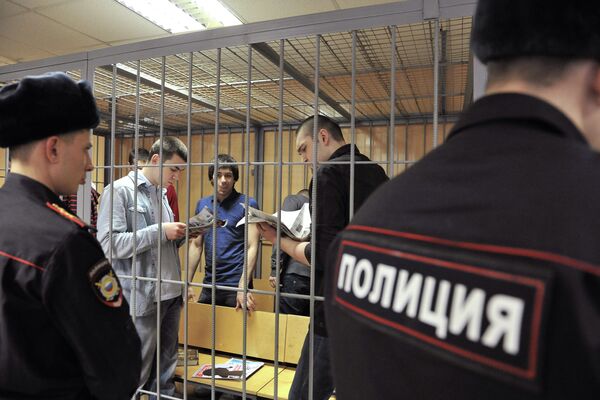 The designation applies only to people arrested for non-violent protest, Kommersant quoted the head of the organization’s Russian branch Sergei Nikitin as saying.

Amnesty International said the remaining defendants did not qualify for the designation because they used excessive force against police officers in the protest rally on Moscow’s Bolotnaya Square in May 2012, according to the newspaper.

Kommersant reported that two of the Bolotnaya prisoners recognized by Amnesty, Denis Lutskevich and Alexei Polikhovich, reacted negatively to the announcement, demanding either all 12 of the defendants be recognized as prisoners of conscience, or none of them.

Over 400 people were arrested and scores were injured in the protest on Bolotnaya Square that turned violent on the eve of President Vladimir Putin’s inauguration to a third presidential term. Dozens of participants were later charged with inciting mass riots and using violence against law enforcement representatives.

Activists claim the violence – the first of its kind in the mass protests following the elections of December 2011 and March 2012 – was deliberately provoked by the authorities. Investigators claimed the protest was carefully organized by opposition leaders in the pay of a Georgian politician close to former President Mikheil Saakashvili.

Amnesty International recognized three other suspects in the case as prisoners of conscience in October and urged the Russian government to immediately release all those who did not act violently during the clash.

The organization has declared a number of Russian public figures as prisoners of conscience in the past, including opposition leader Alexei Navalny, imprisoned members of the anti-Kremlin punk group Pussy Riot, and jailed former oil tycoon Mikhail Khodorkovsky.