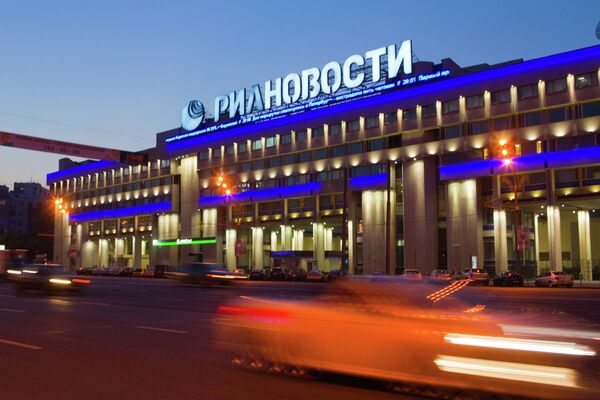 © RIA Novosti . Mikhail Fomichev
/
Go to the mediabank
Subscribe
International
India
Africa
On Monday Russia announced the creation of a new media conglomerate, to be a major player not only within the country, but also overseas.

In a special decree signed by Russian President Vladimir Putin, Moscow announced the establishment of a new media entity that will absorb and unite under one roof several major players on the Russian and international media markets. Newly-created conglomerate Rossiya Segodnya will include the RIA Novosti news agency and all of its side projects, as well as radio broadcaster Voice of Russia, broadcasting worldwide in dozens of languages. The move is the latest in a series of steps aimed at modernizing Russia’s media sector, according to officials.

RIA Novosti is one of the largest Russian news agencies, providing news in 14 languages, while Radio Voice of Russia broadcasts to 160 countries around the globe in 38 languages. However, both entities have been sharply criticized for ineffective spending of their budgets.

“Russia has its own independent politics and strongly defends its national interests: it’s difficult to explain this to the world but we can do this, and we must do this,” Ivanov told reporters.

The direct translation of Rossiya Segodnya is Russia Today, but the new body will be separate from RT, a Russian international TV network formerly known as Russia Today.

The changes, including legislative amendments, must be carried out by the government within three months, according to the Kremlin. Rossiya Segodnya will be located in the current RIA Novosti building in downtown Moscow, according to the decree.
Newsfeed
0
Access to the chat has been blocked for violating the rules . You will be able to participate again through:∞. If you do not agree with the blocking, please use the feedback form
The discussion is closed. You can participate in the discussion within 24 hours after the publication of the article.
To participate in the discussion
log in or register
loader
Chats
Заголовок открываемого материала