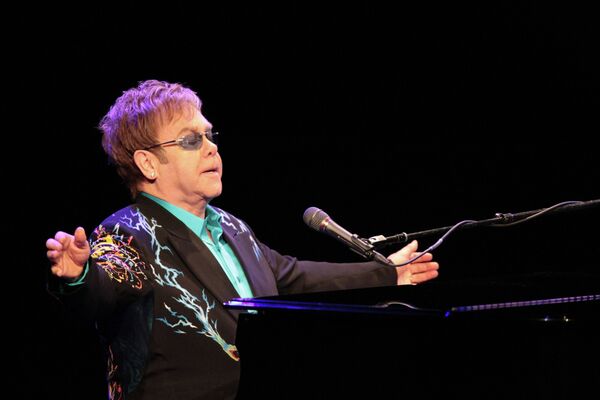 Elton John used the sell-out concert in Moscow’s Crocus City Hall to condemn a Russian law, widely seen as anti-gay, which forbids the promotion of non-traditional sexual relations among children.

Russian investigators have said that Tornovo, 23, was murdered in May because of his sexual orientation, a death critics have linked to a growing wave of anti-gay sentiment in Russia fuelled by the new law.

During the concert, Elton John, 66, said he had been warned by friends not to perform in Russia.

He described the law as both “inhumane” and “isolating,” the BBC reported.

And he called on people to enjoy his music regardless of age, gender or sexual orientation – an attitude that he said was the right one for his children, and the children of his audience.

Russian officials have defended the law, which came into effect in March, as necessary to protect children, and they maintain that it does not affect the freedom of adults to make their own sexual choices.

In an interview with a British newspaper in September, the famous singer said that he was determined to visit Russia in order to show his support for gay people.

Elton John is not the first foreign musician to use a concert tour to condemn Russia’s gay rights record.

US pop icons Madonna and Lady Gaga received legal threats from conservative Russian lawmakers after they championed the LGBT community during gigs in Russia last year.

An outspoken advocate for gay rights, Elton John married his partner David Furnish in 2005 in one of Britain's first same-sex ceremonies. The couple has two sons born by the same surrogate mother.

Before leaving Russia, he is scheduled to play another concert Saturday in the Volga city of Kazan, the capital of Russia's mainly-Muslim Tatarstan region.

Elton John has a long history of performing in Russia. He was one of the first western musicians to come to the Soviet Union when he played concerts in Moscow and St. Petersburg in 1979. His last visit was in 2010.