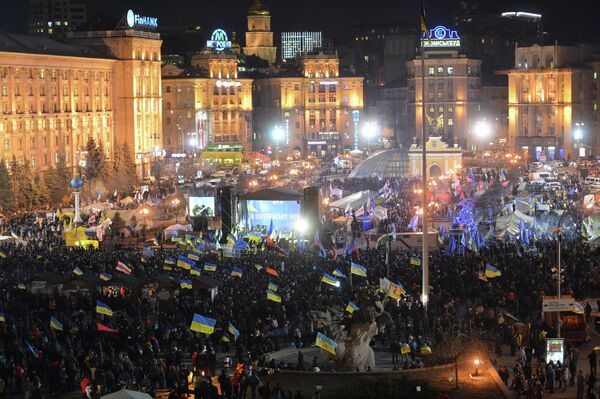 Pro-EU protesters blocked the entrances to the Ukrainian president’s administration building Friday, as widespread public unrest in the country entered its third week.

The protesters, numbering over 1,000 according to Radio Svoboda, set up barricades near Independence Square in the capital Kiev, where they spent the night in anticipation of the government sending in police to disperse the crowd.

The police made no effort to intervene, although soldiers are preventing more protesters from entering the street where the president's office is located, a RIA Novosti correspondent at the scene said.

The protesters chanted “Police together with people,” and protest leaders appealed to the demonstrators not to attack the troops. “They are not Berkut (riot police), these are interior troops, they are the same people as us,” one of the protest organizers said.

Berkut police broke up a demonstration in central Kiev last Saturday, causing large numbers of casualties. President Viktor Yanukovych later condemned the use of force against the protesters and ordered prosecutors to investigate the incident.

The opposition has called for another mass demonstration in the city center for Sunday, Radio Svoboda reported.

The Ukrainian government backed out of long-discussed plans on November 21 to sign association and free-trade agreements that would have brought the country closer to the European Union, opting instead to strengthen economic relations with Russia.

Hundreds of thousands of people have since taken to the streets of Kiev in the largest protests since the country’s 2004-2005 Orange Revolution.