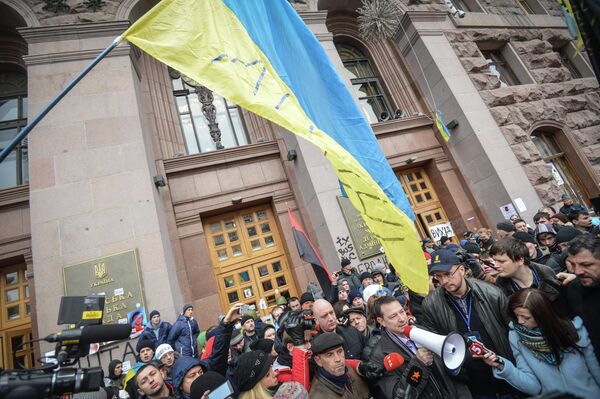 © RIA Novosti . Alexey Kudenko
/
Go to the mediabank
Subscribe
International
India
Africa
Police issued an ultimatum to more than a thousand protesters surrounding Ukraine’s Cabinet of Ministers building in central Kiev on Thursday, saying they must leave the area within five days or officers will take action.

KIEV, December 5 (RIA Novosti) – Police issued an ultimatum to more than a thousand protesters surrounding Ukraine’s Cabinet of Ministers building in central Kiev on Thursday, saying they must leave the area within five days or officers will take action.

Opposition leaders vowed earlier this week to continue with rallies in which thousands of people have taken to the streets of Kiev and other Ukrainian cities in anti-government protests that began last month when the government announced it was postponing the signing of political and free-trade agreements with the European Union.

Currently, more than 12,000 protesters are rallying across the Ukrainian capital. Two groups entered and occupied the city administration building and the Trade Union headquarters Sunday, and crowds have also gathered outside other key official buildings: the Cabinet of Ministers, the presidential administration and the parliament.

About 10,000 protesters – the biggest crowd in Kiev at the moment – are rallying outside the parliament, the Verkhovna Rada. Legislative work has been suspended since Wednesday morning, when opposition lawmakers blocked the legislature’s rostrum and presidium.

Small groups of protesters moved on Wednesday evening to the headquarters of the country’s National Security Council, the Interior Ministry and the Shevchenko District Court, where cases of detained activists are currently being heard.

The capital’s newly appointed acting police chief Valery Mazan said law enforcement officers would “take measures to unblock the Ukrainian government building [Cabinet of Ministers]” if the demand is not met by the deadline. He did not elaborate on what type of action would be taken.

“Police are taking all possible measures to keep the rallies peaceful. We are doing our best to avoid the use of force. But we will act in a firm and determined way if the law is violated,” Mazan was quoted as saying by Ukraine’s UNIAN news agency. “We are not going to negotiate with criminals; we have other legal means and possibilities of dealing with them.”

Mazan was apparently referring to a court ruling issued earlier this week that ordered protesters to immediately leave all official buildings currently under siege. The ruling was read out to a crowd of several thousand rallying outside the Cabinet of Ministers on Thursday.

It was not immediately clear whether the police’s five-day ultimatum was also directed at the protesters occupying the city administration and trade union building, as well as at the crowd outside the Cabinet of Ministers building.

About 100 activists currently rallying outside the occupied city administration building hoisted an EU flag and the red-and-black flag of Ukrainian nationalists on flagpoles outside the building Thursday.

Meanwhile, a small group of activists brought a birthday cake to the Interior Ministry’s headquarters to wish the Berkut special task police division, which violently dispersed a protest Saturday, a happy 25th birthday.

According to the activists, the cake was brought “as a sign of respect to officers who have honestly performed their anti-criminal duties for 25 years,” UNIAN reported.

The ministry’s doors had been locked and door handles removed to prevent possible attempts to seize the building, so the cake was left at the main door.

Three criminal cases into abuse of authority have been opened against Berkut officers, whose violent crackdown on protesters camping on Independence Square in the heart of the city early on November 30 left some 80 people injured and triggered massive clashes between protesters and police.

According to the latest figures, about 200 people have sought medical help as a result of the violence that followed over the weekend. One young woman was reported to have died, but the government – and later the “victim” herself – dismissed the rumors.

The opposition claims that 13 activists – mostly students – have been missing since the Independence Square crackdown. Protesters have handed a request to the Interior Ministry, demanding a criminal inquiry into their disappearance.

Kiev police have launched 64 criminal cases against protesters since the start of the unrest and detained 14 people at the request of investigators. According to the Interior Ministry’s deputy head of investigations, Oleh Tatarov, none of the detainees were “peaceful protesters.” They face charges of hooliganism, public order violations and using violence against law enforcement officers, and their actions were recorded by CCTV cameras, he said.

The ongoing protests did not disrupt Thursday’s meeting in Kiev of foreign ministers from the Organization for Security and Cooperation in Europe. The event was scheduled long before the protests erupted.

US Assistant Secretary of State Victoria Nuland said at the meeting that Ukraine now has to choose between meeting the aspirations of its people or disappointing them and risking chaos and violence.

Ukrainian Prime Minister Mykola Azarov replied that protests are a completely normal event in a country where democracy is developing.

The Ukrainian premier, who on Wednesday invited the opposition to join EU talks and oversee the investigation of Saturday’s crackdown on protests, took a harsher stance the following day, saying that any cooperation will only be possible when the protesters leave the area around the Cabinet of Ministers building.

He said that the majority of the demands voiced in the first days of the rallies have now been met, and that certain “extremist-minded forces” in the country are simply deliberately trying to impede the government’s efforts to get internal and foreign political processes back on track.

“In order to get things back to normal, these extremists must be deprived of their role in forming the political agenda,” he said. “[Neo] Nazis, extremists and criminals cannot be partners in European integration talks.”

The OSCE expressed its readiness to assist the government in its attempts to normalize the situation.