Due West: Ukraine’s Drift West Not About If, But When

© Photo : Kommersant
Subscribe
International
India
Africa
So read some signs held up a few hundred demonstrators in front of the recently rebuilt Palace of the Grand Dukes in Vilnius braving the snow in a last-ditch effort to persuade Ukrainian President Viktor Yanukovych to agree to an association agreement with the EU.

So read some signs held up a few hundred demonstrators in front of the recently rebuilt Palace of the Grand Dukes in Vilnius braving the snow in a last-ditch effort to persuade Ukrainian President Viktor Yanukovych to agree to an association agreement with the EU.

Yanukovych was actually actively promoting that deal until a couple of weeks ago, but suddenly, after a little-publicised meeting with Russian President Vladimir Putin, he performed a U-turn and announced that his country would seek closer economic ties with Russia. 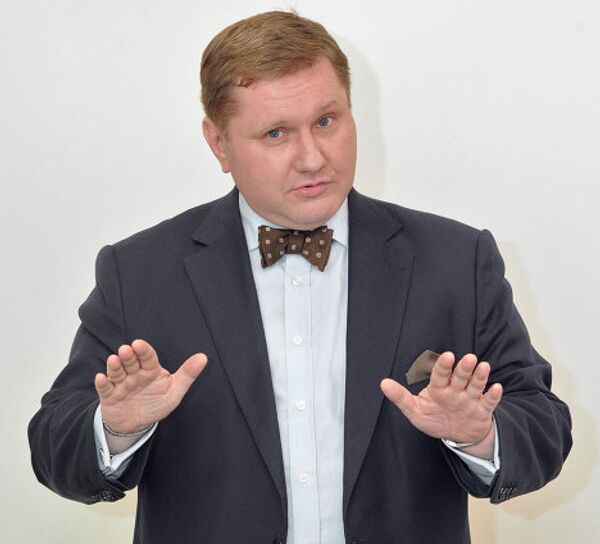 Most observers, both in Kiev and Moscow, think this happened under significant pressure from the Kremlin and say Ukraine could become inextricably dependent on Russia.

They now feel betrayed and are calling for the president to step aside.

As I write this column, events are developing with incredible speed and it seems anything is possible.

Authorities may violently suppress the protests, although this doesn't look like the main scenario now. Or Yanukovych could cave in to opposition demands and call early parliamentary, or even presidential, elections.

There are several consequences of the crisis that are already clear, however.

If Yanukovych clings on to power, Russia will have to get ready to spend what most experts suggest could be anything up to $20 billion by spring 2015, when the next presidential elections in Ukraine are due to take place.

The chances for Yanukovych to get reelected do not look particularly good now. So Moscow will have to make massive cash injections if he is to stand any chance.

Another consequence is total loss of trust between Moscow and Kiev, and between Putin and Yanukovych personally.

In spite of the Ukrainian leader's about-face, the famously suspicious Russian president will never forget how his Ukrainian opposite party nearly slipped out of the Russian sphere of influence.

Russia’s leadership detests what it sees as Yanukovych's unashamed horse-trading, trying to pitch Moscow against Brussels in order to see who offers him more.

And even if now he seems to have forsaken European dreams, it doesn't mean that should circumstances change, he will not walk out on the Kremlin and sign the association agreement with the EU. In fact the document is ready, so all it takes in theory is a phone call to the European Commission to set up a meeting.

Of course. it’s not all that simple.

European leaders too are irked. They probably think it serves him right when Yanukovych, having refused to sign off on the EU deal, regales them with tales of Russian intimidation.

The Ukrainian president has lost whatever reputation he had. Moreover, the mass protests now unfolding show the EU that there are other potential interlocutors in Ukraine’s ruling class with claims to being more trustworthy than the current president.

But the the most dramatic and long-term consequence of the last few weeks is the most important, first and foremost for Russia.

Looking into the not-so-distant, it can be said to have “lost” Ukraine.

Yanukovych's reversal of course may tie the country closer to Russia economically. But mentally, it created a rift between public opinions in two predominantly Slavic states that will not be easily breached. Support for European integration in Ukraine is growing by the week, including in the previously staunchly pro-Russian east of the country and the Crimea. This momentum is likely to increase with time.

Ukraine, a country with a weak tradition of its own statehood and many internal religious and cultural cleavages, seemingly found a convenient antidote to the endless identity debate in the European integration idea.

The slogan of “becoming a good European” – as fuzzy and vague an idea as can be – serves to unite the people perfectly across Ukraine's regional and religious divides. This is especially true of the post-Soviet generations now reaching maturity. The generations which remember the Soviet Union, who are usually mistrustful of most things new, are leaving the historical stage.

In the next ten to fifteen years, the younger generations will take over over the country and probably inevitably elect their president – conceivably a figure weary of Russia and focused on going for the EU membership.

The blame for the European integration not happening sooner would be squarely laid not so much at Yanukovych's feet but at Russia's.

And this is yet another blow to Russia’s long-term influence in the post-Soviet space. That is if you think that it still exists.

With Moldova and Georgia initialling their own association agreements with the EU in Vilnius last week, and possibly signing them next year, it seems that the post-Soviet space has ceased to be a coherent concept.

And Ukraine undecidedly lingering in Russia's backyard will not change this.

Konstantin von Eggert is a freelance commentator and consultant. In 2010-2013 he worked for Kommersant FM radio in Moscow as a commentator and as Editor-in-Chief. He was Diplomatic Correspondent for Izvestia in the 1990s and later the BBC Russian Service Moscow Bureau Editor. Konstantin has also spent some time working as ExxonMobil Vice President in Russia. He was made Honorary Member of the Order of the British Empire by Queen Elizabeth II.

Due West: Russia’s Arms Deal With Egypt Is Huge Blow to US

Due West: The Many Uses of Monarchy in Russia

Due West: Khodorkovsky: From Prison to Politics?

Due West: Russia’s Weak Identity Is the Key to Moscow’s Nationalist Riots

Due West: Deciphering the Kremlin: Reading the Runes of Russian Officialdom

Due West: Black Clouds on the Horizon for Russia and Its Neighbors

Due West: A Dividing Issue, 20 Years On: Russia’s 1993 Constitutional Crisis