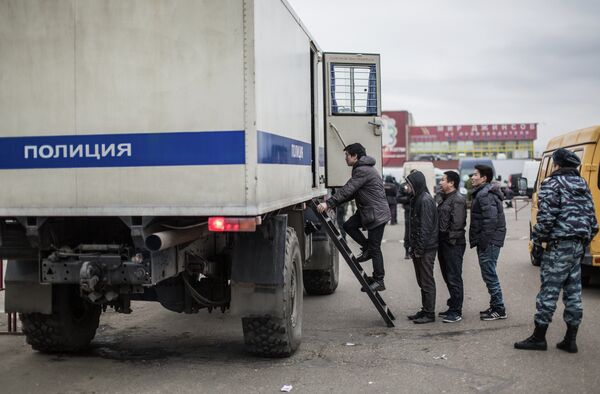 © RIA Novosti . Andrey Stenin
/
Go to the photo bank
Subscribe
Prosecutions over illegal migration in Moscow have risen almost 60-fold in the past year, according to Russia’s Interior Ministry.

MOSCOW, December 5 (RAPSI) – Prosecutions over illegal migration in Moscow have risen almost 60-fold in the past year, according to Russia’s Interior Ministry.

Some 1,095 criminal cases over illegal migration were opened in Moscow in 2013, compared to just 19 last year, the ministry’s press service reported.

Anatoly Yakunin, the Moscow City police chief, said earlier that nearly 840 had been initiated against people organizing illegal migration to the capital.

Political concern over the issue has soared since riots erupted in the southern Moscow suburb of Biryulovo in October over the fatal stabbing of a local resident, allegedly by a migrant. Angry mobs ransacked stores and attacked police amid demands for a crackdown on migration and accusations that officers were failing to confront criminal gangs.

The disturbances were followed by mass arrests of migrants in police raids across the city. In a bid to defuse discontent, Yakunin said that police would carry out weekly operations to round up unauthorized foreign workers.

More than 2,000 offences connected with the organization of illegal migration were uncovered in Russia in the past nine months, Interior Minister Vladimir Kolokoltsev told the State Duma in October.

He said that crimes had tripled in comparison with the same period last year. The number of migration crimes solved by police this year had increased by more than 1.5 times, he added.

Sergei Sobyanin, the Mayor of Moscow, told the City Duma at the end of October that about 650 criminal cases had begun in the capital since the beginning of the year over the organization of illegal immigration. This compared to fewer than 20 cases last year, he said.

Opinion polling has shown deep distrust of migrants among Russians. A survey of 1,600 people in August by the state-run Russian Public Opinion Research Center found that 65 percent believed migrants increased crime rates. Forty percent believed that migrants were not good for the economy, with just 16 percent considering their presence beneficial.

Migration was a key issue in September’s mayoral election in Moscow, the first for a decade. Both Sobyanin and his leading opponent Alexei Navalny promised tough action against illegal migrants in response to a growing nationalist mood among voters.

The Federal Migration Service (FMS) said in March that about three million out of Russia’s five million migrant workers are in the country illegally. Most come from neighboring former Soviet republics in Central Asia and the Caucasus in search of better job prospects.

Despite the social tensions, the service calculated that Russia needs an inflow of more than 300,000 migrant workers annually to satisfy the economy’s labor demands. Konstantin Romodanovsky, the FMS chief, said that a declining working-age population meant that the country needed this number of people each year “to come get naturalized and permanently live in Russia”.