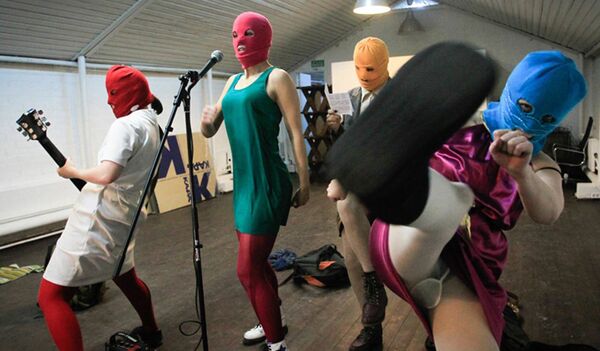 © Home Box Office
Subscribe
International
India
Africa
A feature documentary about a group of anti-Kremlin feminist punk rockers jailed after mounting a protest performance in a Moscow cathedral has been shortlisted for an Oscar award.

MOSCOW, December 4 (RIA Novosti) – A feature documentary about a group of anti-Kremlin feminist punk rockers jailed after mounting a protest performance in a Moscow cathedral has been shortlisted for an Oscar award.

The film is among 15 features picked in the documentary category by the Academy of Motion Picture Arts and Sciences.
The movie, which was included in the list published online Monday, tells the story of Pussy Riot, the band that came to prominence in 2012 after staging a “punk prayer” in Moscow’s main Orthodox cathedral. The gesture was intended to draw attention to what the group said the inappropriately close relationship between the church and the government. Three members in the band, who were distinctive for their bright neon-hued balaclava masks, were later sentenced to two years in jail. One was released on probation, while two are expected to be released early next year.

The movie, titled ''Pussy Riot: A Punk's Prayer," was filmed over the course of six months by US filmmakers Mike Lerner and Maxim Pozdorovkin. The rights to the documentary were acquired by US cable channel HBO.

The shortlist unveiled this week will on Jan. 16 be whittled down to five nominees.

The Pussy Riot movie was selected for Oscar consideration along with widely anticipated winner “The Act of Killing," which studies the history of Indonesian death squads in the 1960s.

Another potential nominee is “Which Way Is the Front Line from Here? The Life and Time of Tim Hetherington,” a film about an internationally celebrated war photographer killed during Libya’s civil war in 2011.

The 86th Academy Awards ceremony is set to take place on March 2.