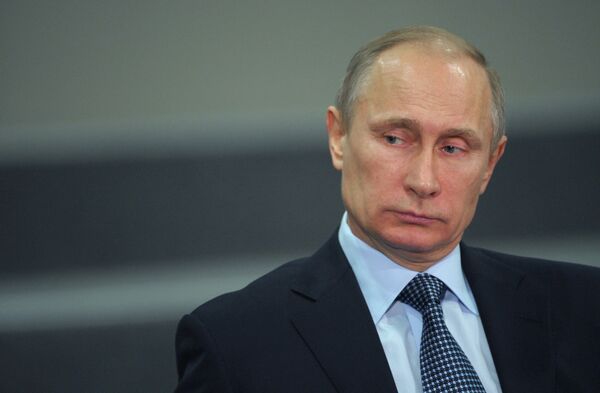 © RIA Novosti . Alexei Nikolsky
/
Go to the mediabank
Subscribe
International
India
Africa
An independent poll released Tuesday showed that one-third of Russians do not support Vladimir Putin’s actions as president, but the findings have been roundly criticized as unreliable by an influential pro-Kremlin political analyst.

MOSCOW, December 3 (RIA Novosti) – An independent poll released Tuesday showed that one-third of Russians do not support Vladimir Putin’s actions as president, but the findings have been roundly criticized as unreliable by an influential pro-Kremlin political analyst.

Steadily improving economic conditions and political stability have ensured Putin broad favor among Russians over the almost 14 years he has served alternately as president and prime minister.

According to the survey conducted by the Levada Center polling agency in mid-November, 31 percent of respondents had a negative opinion of Putin’s actions.

The proportion of those questioned that back Putin’s policies stood at 47 percent, the lowest since 2001.

Sixteen percent said they did not have enough information to express an opinion.

But Dmitry Badovsky, head of the Institute of Socio-Economic and Political Research and a former deputy head of the presidential administration for domestic policy, assailed the results as unscientific.

Badovsky also said the margin of error undermined the ultimate impact of the findings.

While the Levada survey suggests overwhelming support for Putin’s policies may have weakened, the president is still generally held in high regard.

Fifty-two percent of respondents told the Levada Center that their overall opinion of Putin was generally favorable. Only 29 percent said their attitude to the president was generally unfavorable.

Similar polls conducted in from 2001 to 2007, during Putin’s first two terms as president, showed the number of Russians supporting him as ranging between 68 percent and 76 percent.

The number of his critics never exceeded the 15 percent mark over that period.

Levada Center based its findings on responses from 1,603 people across 45 regions.