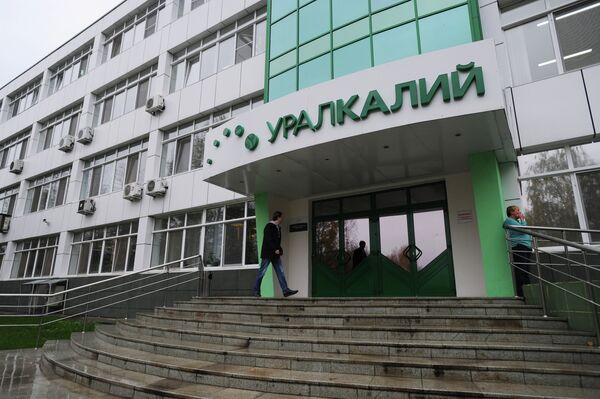 © RIA Novosti . Pavel Listcin
/
Go to the photo bank
Subscribe
Russian billionaire Dmitry Mazepin's Uralchem fertilizer company said Monday it will buy a 20 percent stake in potash giant Uralkali, in a development that could end a row that has tested ties between traditional allies Russia and Belarus.

MOSCOW, December 2 (RIA Novosti) – Russian billionaire Dmitry Mazepin's Uralchem fertilizer company said Monday it will buy a 20 percent stake in potash giant Uralkali, in a development that could end a row that has tested ties between traditional allies Russia and Belarus.

At current market prices, the deal would be worth around $2.9 billion.

Uralchem said the shares it has agreed to buy include those held by Uralkali partners Anatoly Skurov and Filaret Galchev, who control 4.8 percent and 7 percent of the company respectively.

The change of ownership at Uralkali may serve to smooth over tensions provoked by the company's surprise decision to dissolve a trade cartel in July with Belarusian potash producer Belaruskali.

Belaruskali is one of Belarus' largest companies and serves as a key revenue driver for the former Soviet nation.

The dispute caused share prices for fertilizer companies around the globe to tumble and sent the price of potash on a steady downward slide.

Shortly after the cartel was dissolved, Belarus arrested Uralkali head Vladislav Baumgertner for allegedly abusing his power at the company, an accusation he said was politically motivated. Belarus later changed the charge against him to embezzlement.

Uralchem’s statement on Monday said the deal to acquire the stake in Uralkali was a strategic investment and would be completed soon.