Russia Cancels Export Duties for Gas and Diamonds to Armenia 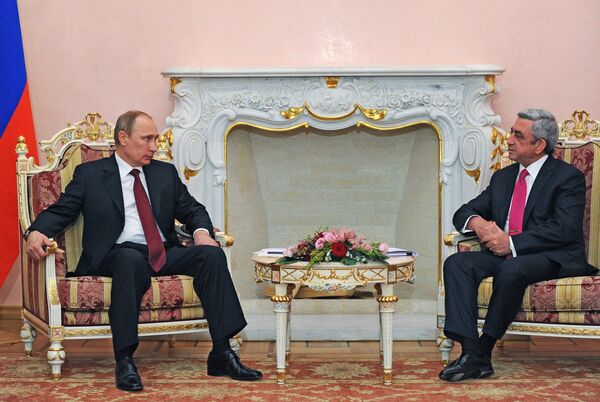 Russia and Armenia on Monday signed an intergovernmental agreement to cancel export duties for supplies of natural gas, oil products and diamonds to the South Caucasus nation.

Russian President Vladimir Putin signed the deal with his Armenian counterpart, Serzh Sargsyan, during a high-level visit to the country.

Armenia decided in September to join the Moscow-led Customs Union of Russia, Belarus and Kazakhstan. A roadmap on Yerevan’s admission is to be signed later in December.

Sargsyan told journalists on Monday that his country would take the required steps to join the union as soon as possible, and Putin praised Armenia for its efforts.

Reuters reported that some 500 people went out to the Armenian capital’s streets on Monday to protest the country’s plans to join the union. Gazeta.ru reported that more than 100 protesters were detained.

The protests followed anti-government demonstrations in Ukraine, which last week halted plans to sign key agreements with the European Union in favor of stronger economic ties with Russia.

Western critics have accused the Kremlin of pressuring former Soviet states to give up their attempts to closer integrate with the European Union. Russia has denied the accusations.

Russia and Armenia have agreed that the gas price for Armenia would be cut down to $189 per 1,000 cubic meters, Putin told journalists in Yerevan on Monday.

Putin thanked Armenia’s leadership for creating favorable conditions for Russian business there and said he hoped that bilateral trade this year would exceed last year’s $1.2 billion.

The Russian president stressed that Russia remained Armenia’s leading trade and economic partner in terms of both trade and investment.

In turn, Sargsyan pledged to do everything to “expand the positive results reached in the recent years” in bilateral collaboration.

An intergovernmental agreement on cooperation in nuclear safety, a plan of action for economic collaboration and other deals were also signed following talks between the two presidents.

Prior to the talks, Putin visited a Russian military base in the city of Gyumri.