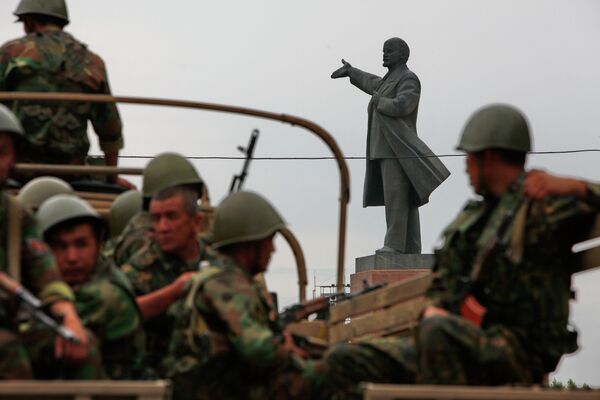 © RIA Novosti . Andrei Stenin
/
Go to the photo bank
Subscribe
Protesters in Kyrgyzstan’s second-largest city attempted Monday to storm a government building during a rally in support of a prominent jailed opposition figure.

Local media in the Central Asian nation estimated that several thousand people gathered in the center of Osh, a southern city rocked in recent years by political and ethnic unrest, in a call for the release of Akhmatbek Keldibekov.

An eyewitness in Osh told RIA Novosti that police repelled a brief attempt by some protesters, who threw stones and bottles, to break into the regional administration headquarters.

The witness said the crowd assembled in front of the building was demanding the resignation of Osh region governor Sooronbay Jeenbekov if Keldibekov was not released.

Keldibekov, a former parliament speaker and a deputy with the nationalist Ata-Zhurt party, was detained November 20 on suspicion of involvement in embezzling 40 million Kyrgyz som ($830,000) while heading the country’s social fund and tax service last decade. Keldibekov denies the charges.

A number of demonstrations have been held in Osh and the country’s capital, Bishkek, in protest at his arrest.

Last week, hundreds of his supporters blocked a major highway linking Kyrgyzstan with China for a period of 24 hours.