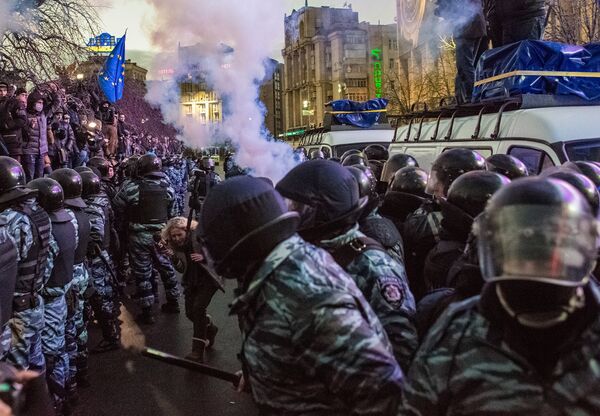 “I want to apologize for the excessive use of force on the night of November 30 in Independence Square,” Vitaly Zakharchenko told session of the Interior Ministry Board Sunday.

The minister warned thousands of protesters, starting a new rally in Kiev's Independence Square, the scene of violent crackdown on protesters Saturday, that police would respond.

“If there are calls for mass disturbances, then we will react to this harshly,” Zakharchenko said. “Can Ukraine have a bloody war? Do we want to go the way of Tunisia or Libya?” he was quoted by UNIAN as saying.

Meanwhile, protesters in Kiev have ruined a police fence around the Christmas tree and put the Ukrainian flag on top of it. Police were not spotted at the scene, a RIA Novosti reporter said.

Ukraine’s Prosecutor General Viktor Pshonka sided with protesters who were dispersed by riot police Saturday saying: “People were in [Independence Square] legally. This is their constitutional right and the primary task of law enforcement bodies was to ensure that they can exercise their right.”

He called to investigate the use of force by riot police and to check the reports of provocation by people “who were behind the back of peaceful citizens.”

Kiev police chief Valery Koryak, who said he had given the order to send riot police to disperse the protest, handed in his resignation Sunday, the report said citing a police source.