Pashutin Gets Nod as Coach of Russia Basketball Team 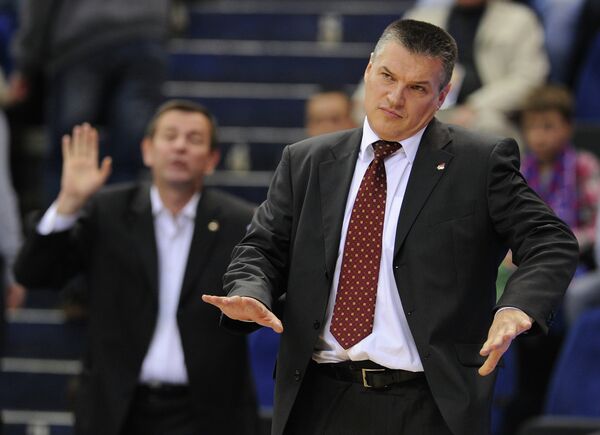 MOSCOW, November 29 (R-Sport) – Basketball coach Evgeny Pashutin has been rewarded for guiding Russian team Lokomotiv Kuban into the top-tier Euroleague with a contract to coach the national team.

Pashutin, 44, will take over from Vasily Karasev, whose four-month stint at the helm ended in disaster at EuroBasket, where Russia won only one game and was unable to qualify for next year’s World Cup.

“I’d like to thank everyone for the trust. I’m ready to work day and night,” said Pashutin, who will combine his duties at Kuban with those of leading the national team.

“Besides tactics and training process, we will have to improve relations with the players and fans. It is a big responsibility and a huge volume of work,” he said.

Almost all of the national team's stars – including Timofey Mozgov, Alexander Kaun, Andrei Kirilenko and Viktor Khryapa – cited different reasons for skipping the European championships in September, leaving Karasev with a young and inexperienced roster.

Pashutin led Lokomotiv to triumph in the second-tier Eurocup last season, enabling the team to qualify for participation in the Euroleague. On Thursday, Lokomotiv qualified for the final 16 stage in its maiden Euroleague season.

Pashutin’s other honors include European gold with Russia’s U20 team, a VTB United League title with CSKA Moscow in 2010, and another Eurocup trophy with UNICS Kazan.