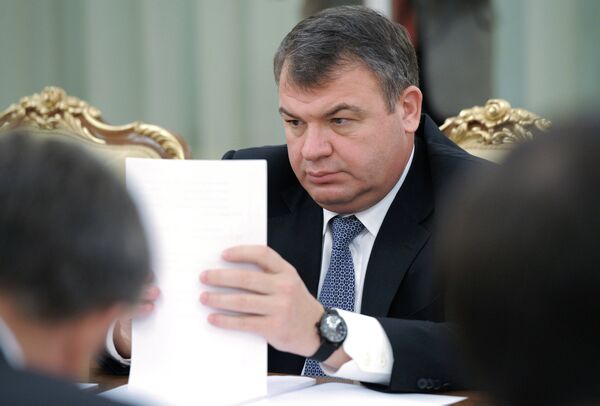 Serdyukov is suspected of negligence, punishable with up to three months in detention, investigators said Thursday.

He will face formal negligence charges by the end of next week, Committee spokesman Vladimir Markin told Lifenews.ru online tabloid.

The charges may be reclassified by then, Markin also said, but did not elaborate. Serdyukov has already been questioned more than once as a witness in investigations into corruption in the Defense Ministry.

He is accused of causing 56 million rubles ($1.7 million) worth of damage to the state by using conscript soldiers to build infrastructure for a private holiday resort.

Serdyukov is the first minister in the 13 years of President Vladimir Putin’s rule to face a criminal case.

Serdyukov’s fall from grace began last November, when he was sacked from the job that he had held since 2007.

Several of his subordinates came under investigation on corruption charges involving the sale of ministry real estate, with total damage put by the Investigative Committee earlier this year at 4 billion rubles ($120 million).

Serdyukov, a former furniture retailer and tax official, was tasked with reforming Russia’s armed services and defense industry, a sector plagued by corruption and poor management.

But his reforms met a backlash from both the uniformed establishment and military industry and some elements of the program are being rolled back by his successor Sergei Shoigu.