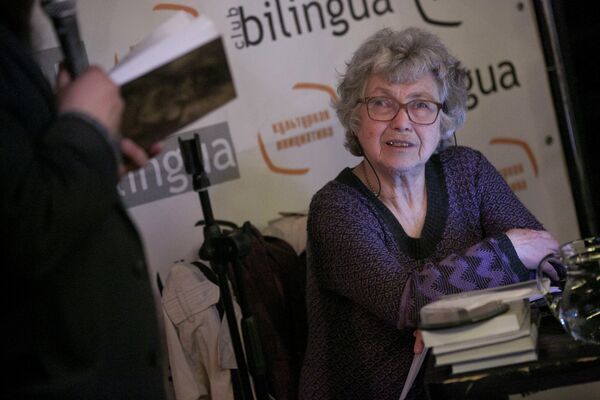 Natalya Gorbanevskaya, who was born in Moscow in 1936, studied philology at Leningrad University and went on to work as a librarian and translator.

She became a founding member of the self-published underground publication The Chronicle of Current Events, which documented human rights issues in the Soviet Union for a 15-year period up until 1983.

On August 25, 1968, Gorbanevskaya took part in an eight-person demonstration on Red Square against the decision to dispatch Soviet armed forces to crush the reformist Prague Spring. The group stood on a spot reserved for executions in prerevolutionary times, holding up signs reading “Hands Off Czechoslovakia” before being attacked by security service agents.

According to a biography by the Memorial human rights group, Gorbanevskaya was arrested in late 1969 for her dissident activities and diagnosed as having a psychiatric disorder by Moscow’s then-notorious Serbsky Institute. In July 1970, she was forcibly institutionalized at a mental hospital in Kazan, where she spent over a year, followed by several months in one of Moscow's most infamous prisons.

In August, Gorbanevskaya and several other demonstrators marked the 45th anniversary of the Czechoslovak invasion with a recreation of the 1968 protest on Red Square. The rally was quickly dispersed and most of its participants detained by police.

After emigrating from the Soviet Union in 1975, Gorbanevskaya moved to Paris and worked as an editor of the Kontinent émigré dissident journal and as a correspondent for Radio Free Europe’s Russian service.

From the early 1980s through to 2003, she worked in the émigré newspaper Russkaya Mysl.

Gorbanevskaya has authored dozens of collections of poetry and translated literary works from Polish, Czech, Slovak and French.

In 1976, US folk singer Joan Baez released “Natalia,” a song she dedicated to Gorbanevskaya. Introducing the song on her "From Every Stage" live album, she said that "it is because of people like Natalia Gorbanevskaya, I am convinced that you and I are still alive and walking around on the face of the earth."

Corrected with details about psychiatric institutions and "librarian" instead of "bookseller"; updated with several minor copyedits.