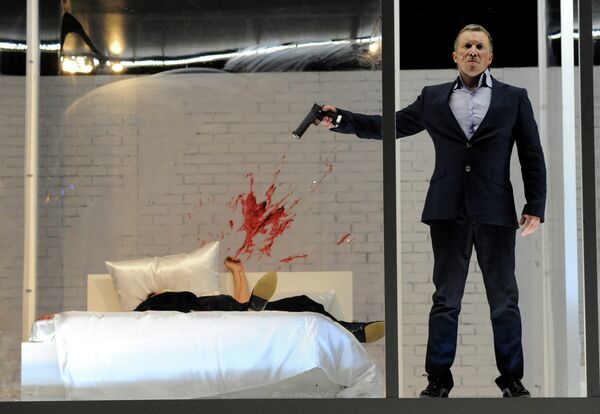 Dmitry Enteo and a female accomplice hijacked the stage during a performance of Konstantin Bogomolov’s “An Ideal Husband” at the Chekhov Moscow Art Theater late Thursday.

The duo spent about two minutes loudly extolling the public to fear God, before being dragged away kicking and screaming by guards, according to a video of the incident posted on YouTube.

The pair interrupted a scene in which a gay priest prays to a naked woman who is pretending to be crucified, Enteo told RIA Novosti.

A member of the audience said that some people in the audience mistook the crusaders’ intervention for the play’s scripted finale and left after they were taken away.

City police reported detaining two people on hooliganism charges, but did not elaborate.

Enteo, 24, told RIA Novosti the play violated a recent law that introduces jail terms of up to three years for offending the feelings of religious people.

Enteo and his radical Orthodox Christian supporters have a track record of flashy media stunts, including storming the G-Spot erotica museum in Moscow to “preach” to staff, assaulting in the streets people wearing T-shirts depicting Pussy Riot members as the Virgin Mary, and hijacking a rally by the ironic religion of Pastafarianism to pelt participants with macaroni.

The attacks are not endorsed by the Russian Orthodox Church, whose clergy have previously criticized them.

Bogomolov, 38, is one of the most popular and controversial theater directors in Russia. His staging of “An Ideal Husband,” based on Oscar Wilde’s works and on stage since February, is billed as a social satire.

(The article was amended to correct the play's name.)