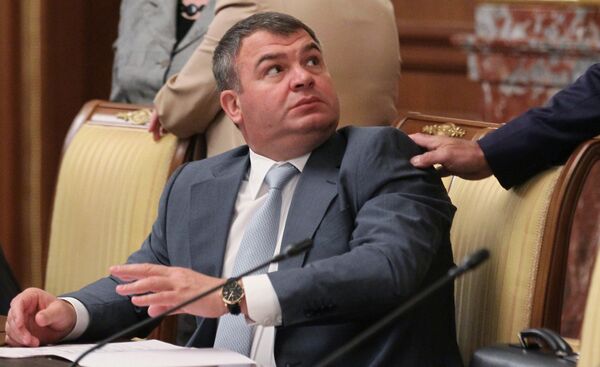 Serdyukov caused 56 million rubles ($1.7 million) worth of damage to the state by ordering serving soldiers to build infrastructure for an elite holiday resort, the Investigative Committee said in a statement.

While he has been repeatedly questioned as a witness, this is the first time a criminal case has been opened against Serdyukov, who was fired by President Vladimir Putin last November amid allegations of high level graft.

Under Russian law, negligence carries a maximum punishment of three months in prison.

Investigators said Serdyukov had given verbal commands to his subordinates to use soldiers to build a private road to the Zhitnoye leisure complex near the Caspian Sea, and for building work at the resort itself.

“Instead of serving [their country] and studying military science, soldiers were planting poplars in the Astrakhan steppe,” the Investigative Committee said.

The Zhitnoye resort, reportedly worth about $4.5 million, was owned by Serdyukov’s brother-in-law at the time the soldiers were involved in construction work at the site.

Russia’s Kommersant newspaper reported earlier this month that investigators had extended their probe into the building of Zhitnoye until January 17. Originally it was expected to be closed in September.

Serdyukov’s lawyer, Genrikh Padva, said Thursday that he had not been informed of the criminal case against his client and declined to comment.

The Zhitnoye case is one of several ongoing corruption scandals involving the Defense Ministry.

Most of the cases have focused on the activities of Oboronservis, a Defense Ministry company that repaired and maintained military property and equipment.

A link to the Oboronservis affair was the official reason given for Serdyukov’s sacking in 2012.