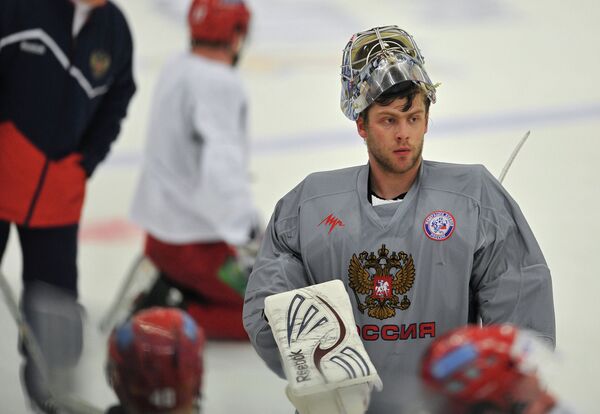 © RIA Novosti . Ramil Sitdikov
/
Go to the mediabank
Subscribe
International
India
Africa
The general manager of Russia’s Olympic hockey team has waded into the controversy over the domestic abuse charge facing goaltender Semyon Varlamov, suggesting he is simply playing too well to be guilty.

MOSCOW, November 26 (R-Sport) – The general manager of Russia’s Olympic hockey team has waded into the controversy over the domestic abuse charge facing goaltender Semyon Varlamov, suggesting he is simply playing too well to be guilty.

Varlamov was charged Saturday in the US city of Denver with a count of third-degree assault after his girlfriend Yevgeniya Vavrinyuk alleged he knocked her to the ground, stomped on her chest and dragged her by the hair during an argument last month.

The 25-year-old netminder for the US team Colorado Avalanche is widely expected to feature on the Russian roster for February’s Olympics in the Russian city of Sochi.

“Semyon’s in good form now, continuing to show that he’s one of the best goaltenders in the [North American] National Hockey League and showing with his game that the truth is on his side,” Russian national team general manager Alexei Kasatonov said on the website of Russia’s SKA St. Petersburg team.

In another apparent reference to the domestic abuse charge, Kasatonov said that Varlamov “is not that kind of guy and would not be capable of such a dirty deed.”

A leading Russian lawmaker, Igor Ananskikh, claimed last month that Varlamov’s arrest was part of a US plot to sabotage Russia’s hopes of a gold medal in Sochi, but Kasatonov rejected the conspiracy claim, saying there was “no provocation” intended.

Varlamov has not commented on the charge against him, although his father Alexander told R-Sport last month that the allegations were groundless.

The maximum punishment facing Varlamov if he is found guilty is two years in jail, according to the Denver district attorney’s office. A separate accusation of kidnapping has been dropped.

The Russian’s next court date is Monday.