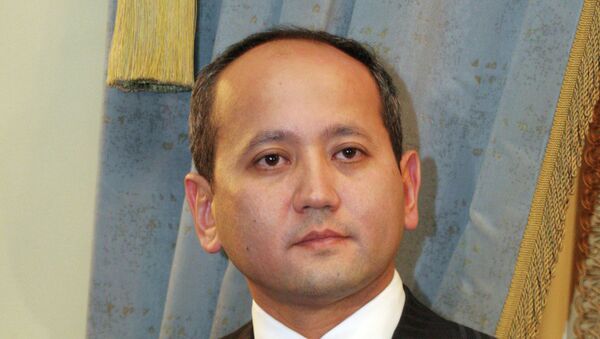 London’s High Court has ordered a fugitive Kazakh former banker to pay damages of around $400 million to the bank he allegedly embezzled it from, the court said.

MOSCOW, November 26 (RAPSI) – London’s High Court has ordered a fugitive Kazakh former banker to pay damages of around $400 million to the bank he allegedly embezzled it from, the court said.

Mukhtar Ablyazov formerly served as the chairman of BTA Bank, a major Kazakhstan bank that was effectively nationalized in February 2009.

The bank has filed 11 separate sets of proceedings in England and Wales seeking to recover upwards of $5 billion that the bank claims was embezzled by Ablyazov when he was at the helm.

The judgement on Tuesday relate to specific proceedings concerning Ablyazov’s alleged theft of “a portfolio of ten holdings of AAA-rated securities with a market value of approximately $300 million which was allegedly misappropriated for the ultimate benefit of [Ablyazov] by a series of linked transactions which took place in 2008 and early 2009,” the court said.

The court ordered Ablyazov to pay the bank a principal sum of $294,138,715.27, with interest to be awarded at the rate of 7.3 percent per annum. The judgment did not explicitly state the total sum including interest, but a BTA statement released Tuesday claimed the sum amounts to around $400 million.

BTA Bank’s Managing Director Pavel Prosyankin lauded the judgment, saying “We consider that the court's damning conclusions about Mr Ablyazov's fraudulent activities in this particular case - and its dismissal of his defense as a fabrication – further vindicate the Bank's continuing efforts to pursue Mr Ablyazov and his associates for the recovery of the assets stolen from the Bank during his tenure as its chairman."

Ablyazov fled to the UK after the Kazakh government acquired a stake in BTA in 2009 and the bank came under the control of its sovereign wealth fund Samruk-Kazyna.

He was granted political asylum in Britain in 2011. However, according to the judgment – he has “remained a fugitive from justice since February 2012.”

His whereabouts remained unknown until he was detained on July 31 near Cannes, France by local police. Kazakhstan, Russia, and Ukraine are all seeking his extradition.