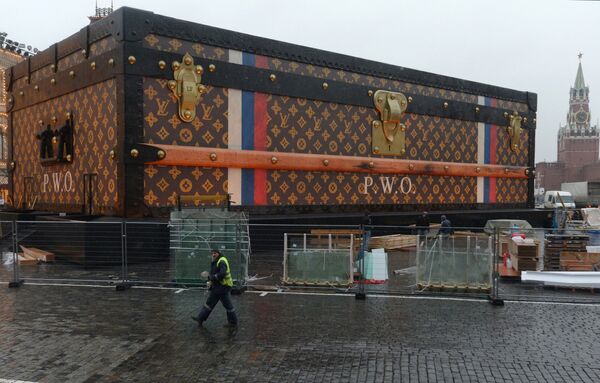 MOSCOW, November 27 (RIA Novosti) – A giant designer suitcase-shaped pavilion installed in the middle of Moscow’s Red Square is being dismantled, city authorities said Wednesday, following a wave of public outrage and numerous demands for its removal.

The organizers of the Louis Vuitton-sponsored installation were preparing to take it down on Wednesday afternoon, the city’s media and advertizing department said, after the Kremlin and Moscow’s landmark GUM department store asked for their new neighbor to be removed. GUM confirmed Wednesday afternoon that work had begun to dismantle the titanic trunk.

Measuring 30 meters (100 feet) long and nine meters (30 feet) high and adorned with the Louis Vuitton logo, the oversized travel case was due to house a "Soul of Travel" exhibition organized by the famed French fashion house from December 2 to January 19.

Consisting of historical suitcases and video installations, the display was one of several events scheduled to commemorate GUM’s 120th anniversary.

But public ire over the litigious luggage reached a fever pitch in recent days as people criticized the suitcase’s placement in Red Square – a UNESCO Heritage Site and the first port of call for most visitors to the Russian capital – as well as the display’s timing over the New Year holiday period.

Lawmakers in Russia’s state parliament, based just across the road from Red Square, complained that the "obscenity" denigrated the landmark, which they called a sacred symbol of Russian government.

A GUM spokesman said Wednesday that the department store had decided to send the suitcase packing after an overwhelmingly negative public reaction, and a Kremlin source told journalists that the presidential administration had not agreed to the pavilion’s construction.

He said there was nothing wrong with the suitcase, although he noted that those who designed it “obviously lacked a sense of proportion.”

The lost luggage, however, may yet find a new place to stay in the capital. Spokespeople from both Gorky Park and the All-Russia Exhibition Center (VVTs), two of Moscow’s largest parks, told RIA Novosti that they were ready to consider taking in the trunk, but that they have not yet received any requests to host the pavilion.

Vodianova, who founded the children’s charity in 2004, expressed hope that the exhibition would not be canceled and that the trunk might be moved to a new location.

“If the exhibition doesn’t take place, not only will we be deprived of an exciting journey into history and beauty, but the charitable funds from ticket sales – which Louis Vuitton originally proposed to transfer to the Naked Heart Foundation – won’t be generated,” the supermodel wrote on her Facebook page.

Louis Vuitton had said it planned to donate the entire proceeds from the exhibition’s 200-ruble ticket sales to Vodianova’s charity. Repeated calls to the fashion house’s head office in London on Wednesday went unanswered.

Updated with quotes from presidential spokesman