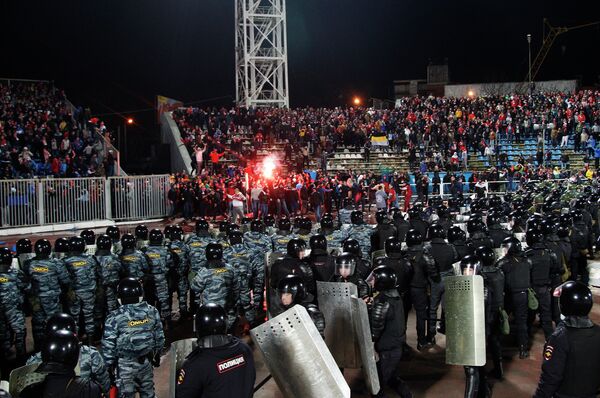 © RIA Novosti
/
Go to the photo bank
Subscribe
Russian police want to limit their traditionally hardline approach to football fans in favor of a more collaborative approach at the 2018 World Cup, the Interior Ministry’s No. 2 official said Tuesday.

Clashes between fans and police are not uncommon at Russian league games, but with the country’s first home World Cup on the horizon, closer ties with fans could usher in a new era of family-friendly viewing, according to first deputy minister Alexander Gorovoi.

Russian fan groups should “be working on a mechanism to govern the admission of fans to the stands so that people could come with their families to our football, as they do at the hockey,” Gorovoi said.

“This goal is one of the most important ones for us because we are moving towards the 2018 World Cup, and policing operations should not be the first option in this area.”

However, Gorovoi, who holds the rank of a two-star police general, had sharp words for the country’s main national supporters’ federation, the All-Russian Union of Fans, who he said had provided “absolutely minimal influence in this area.”

In July, Russian President Vladimir Putin signed into law measures to ban convicted hooligans from sports events for up to seven years.

The so-called Fan Law, which is aimed squarely at keeping the 2018 World Cup in Russia safe from hooligans, will come into effect on January 19, 2014.

Under the new law, if someone serving a stadium ban is found a sports event, they can be fined up to 25,000 rubles ($770) or detained for 15 days. Police and sports federations will be required to keep lists of violators, while stadium owners must install CCTV systems to identify troublemakers.