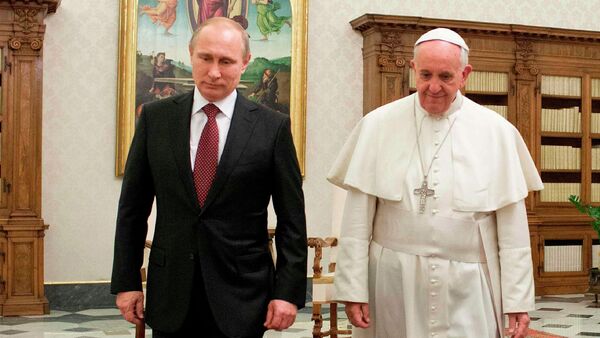 Russian President Vladimir Putin and Pope Francis met in the Vatican on Monday for one-on-one talks that focused on finding a peaceful solution to the ongoing civil war in Syria.

VATICAN, November 26 (RIA Novosti) - Russian President Vladimir Putin and Pope Francis met in the Vatican on Monday for one-on-one talks that focused on finding a peaceful solution to the ongoing civil war in Syria.

During the pope's "cordial and constructive" meeting with Putin, "special attention was given to the pursuit of peace in the Middle East and to the serious situation in Syria," said Vatican spokesman Jesuit Father Federico Lombardi.

The two men agreed that a solution to the conflict should "involve the various ethnic and religious elements, recognizing their essential role in society." They also discussed "the urgency of stopping the violence and bringing the necessary humanitarian assistance to the (Syrian) population."

Putin said Tuesday that in particular they discussed the protection of the rights and interests of Christians in the Middle East.

Putin's spokesman said the one-on-one talks in the Apostolic Palace lasted twice as long as planned.

Putin and the pontiff exchanged gifts, and the pope asked the Russian leader to send his regards to Patriarch Kirill, who heads the Russian Orthodox Church.

Thaddeus Jones, an official with the Pontifical Council for Social Communications, said Putin's meeting with the pope signaled the acknowledgement of Russia's role on the international arena.

He said the Vatican and Italy expressed deep gratitude for Russia's efforts to find a peaceful solution to the Syrian conflict through multilateral negotiations and without an escalation of violence.

The two did not discuss ecumenical issues, Catholicnews.com reported.

Relations between the Russian Orthodox and Roman Catholic churches have been strained by a few issues that have prevented the churches' leaders from meeting. The Moscow Patriarchate has in particular accused the Vatican of trying to lead its believers away from the Russian Church - an accusation the Catholic Church has denied.

After the audience, Putin had dinner with his old friend former Prime Minister Silvio Berlusconi and held closed-door talks with Italian President Giorgio Napolitano at the Quirinale Palace. Putin traveled to Trieste on Tuesday to meet with Italy's Prime Minister Enrico Letta to discuss bilateral cooperation, and economic and international issues including Syria.

Russian Patriarch Kirill said Tuesday that collaboration between the Russian Orthodox Church and the Roman Catholic Church in the Middle East peace effort was especially important ahead of the Geneva-2 conference on Syria.

At a meeting with Archbishop Vincenzo Paglia, the head of the Pontifical Council for the Family, the Russian patriarch praised the Vatican's position on the Syrian civil war, saying Pope Francis' September 4 message to Putin with a call on G20 countries to avoid a strike on Syria was of special significance.

The United Nations said Monday that the long-delayed Geneva-2 international peace conference, dedicated to ending the conflict in Syria, would be held on January 22 in Geneva.

More than 100,000 people have been killed and 9 million people displaced since fighting broke out in Syria in 2011, according to the UN.