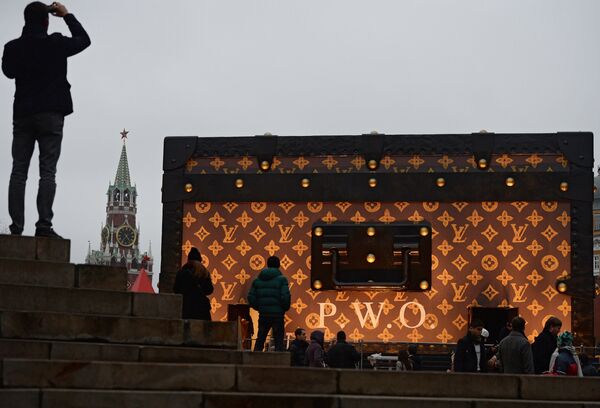 A giant Louis Vuitton suitcase installed on Moscow’s Red Square to showcase the French fashion house’s “deep emotional relationship” with Russia is certainly drawing a strong emotional response from Muscovites: one of sarcasm, ire and outrage.

The trunk, measuring nine meters (30 feet) high and 30 meters (100 feet) long and emblazoned throughout with the brand’s logo, is due to house a Louis Vuitton exhibition from December 2 to January 19.

Yet criticism of the suitcase’s location and the display’s timing has heightened as construction nears completion.

Muscovites traditionally welcome in the New Year with fireworks and celebrations on Red Square, said Konstantin Mikhailov, a member of Russia’s Civic Chamber, but this year they will be forced to share the space with an oversized suitcase.

Noting that the iconic square is a UNESCO Heritage Site and a major tourist attraction, Mikhailov said the Civic Chamber plans to adopt a resolution on the controversial pavilion at a meeting Thursday and will send the complaint to Russian President Vladimir Putin.

State lawmaker Sergei Obukhov of Russia's Communist party called the giant trunk an “obscenity” on Tuesday and said the party would send a request to police demanding an investigation into how authorities could have allowed the project.

“[Red Square] is a sacred place of the Russian government,” Obukhov said, referring to the proximity of the Kremlin. “There are symbols like this that cannot be trivialized or denigrated, because the future of the government depends on it.”

Members of the public also criticized the titanic trunk, though some used wryer expressions of dissatisfaction.

“Putin is building a new mausoleum on Red Square in which he and [Prime Minister] Dmitry Medvedev will take it in turns to lie,” journalist Olga Romanova wrote on Facebook, giving a nod to another famous edifice on the square: Lenin’s Mausoleum.

Social media expert Anton Nossik compared the litigious luggage to another recent Red Square scandal, in which a protest artist nailed his scrotum to the cobblestones. A criminal case was swiftly opened against the artist in response.

“Now they have erected a trunk by Louis Vuitton Moet Hennessy in the same place,” Nossik wrote. “So apparently, when deciding the question of improving Red Square, size matters.”

Tickets to the Louis Vuitton exhibit will cost 200 rubles. The luxury brand says it will donate all proceeds to the Naked Heart Foundation, a Russian children’s charity founded by a fashion model.