US Skier Chases Olympic Dream for Armenia in Sochi 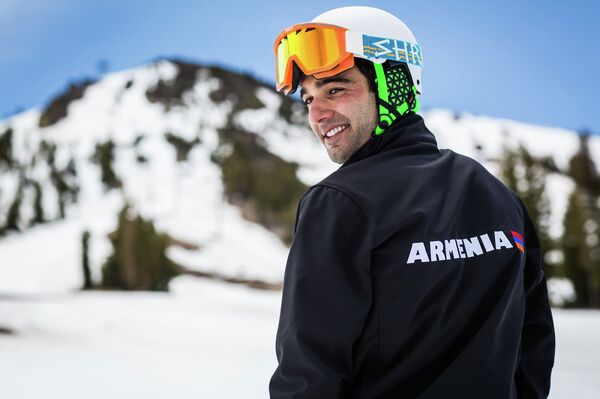 US athletes are unlikely to be hometown favorites at the Sochi Winter Olympics, but California-born skier Arman Serebrakian may garner more local support than most thanks to the Russian city’s sizeable Armenian population.

WASHINGTON, November 25 (by Carl Schreck for RIA Novosti) – US athletes are unlikely to be hometown favorites at the Sochi Winter Olympics, but California-born skier Arman Serebrakian may garner more local support than most thanks to the Russian city’s sizeable Armenian population.

“That’s a huge motivation for me, because of the diaspora living there, and Sochi is pretty close to Armenia. So it’s going to be great having that extra support,” Serebrakian, an American alpine skier set to hit the slopes for the Armenian ski team in Sochi, told RIA Novosti this week.

Serebrakian, 26, was born and raised in the San Francisco Bay Area in a family of ethnic Armenians from Iran and was once a top-ranked American junior skier who dreamed of racing for the US Ski Team. That dream, however, crashed along with him in a 2006 accident on the slopes in Utah that left him with a torn anterior cruciate ligament.

He managed to recover and go on to a successful college racing career at the University of Colorado, though his childhood goal of skiing for the United States had long since been wiped out.

But in 2009 he was approached by the Armenian Ski Federation, which knew that he had an Armenian passport and invited Serebrakian to race for the former Soviet republic in international competitions.

“I thought long and hard about it, and I decided it would be a great honor to do that and a great way to represent my heritage and family by doing what I love,” he said.

Serebrakian, whose ethnic Armenian parents came to the United States from Tehran in 1980 following the Iranian Revolution, grew up immersed in Armenian culture at his home in the small town of Novato, 30 miles (48 kilometers) north of San Francisco.

“Our life at home was pretty much completely Armenian,” he told RIA Novosti. “We spoke the language. We still speak the language to each other at home. The food we eat … all the traditions and everything.”

Skiing occupied a sacred place in their home as well. His father, Armen, is a surgeon who brought Serebrakian to the slopes for the first time when his son was 18 months old.

“The story goes that about a month or two after I learned how to walk, my dad took me up to ski,” said Serebrakian.

His sister, Ani, was a late starter by comparison. She began skiing at the age of two and raced for Armenia in the 2010 Winter Olympics in Vancouver.

Sochi will be Serebrakian’s first Olympic Games, and he has taken a year-long break from his medical studies – he is interested in becoming a surgeon like his father – to train, with a trip to Armenia planned ahead of the games, which are set to kick off February 7.

“Armenia has these great, great mountains, and they have one ski resort, and it’s very nice,” he said. “The terrain is honestly world class, and when the snow comes, it’s really good.”

Despite its location in the Caucasus Mountains, Armenia does not have any competitive ski racing tradition to speak of, so there were not many Armenian skiers for Serebrakian to look to for inspiration as a child.

Instead he grew up idolizing tennis legend Andrei Agassi, whose father is also from Iran and of Armenian descent, as well as admiring the bobsled duo Joe Almasian and Kenny Topalian, fellow American-Armenians who became the first Olympics athletes for the newly independent country when they raced at the 1994 Winter Games in Lillehammer, Norway.

Armenia has won a total of 12 Olympic medals and just one gold since Almasian and Topalian broke the Olympic ice for the country’s blue, orange and red flag, and all of those came in the Summer Games events of wrestling, weightlifting and boxing.

Still, Serebrakian expects that he and his teammates will have considerable support from Armenian fans in Sochi, home to a large percentage of the 281,000 ethnic Armenians who, according to 2010 census data, live in the Krasnodar Region, where the Black Sea resort is located.

Unofficial estimates have put that number at 500,000 or higher.

Serebrakian said he hopes his relatives will be among the fans living in Armenia who travel to Sochi to cheer on their athletes.

“I’m very excited about that,” he said.