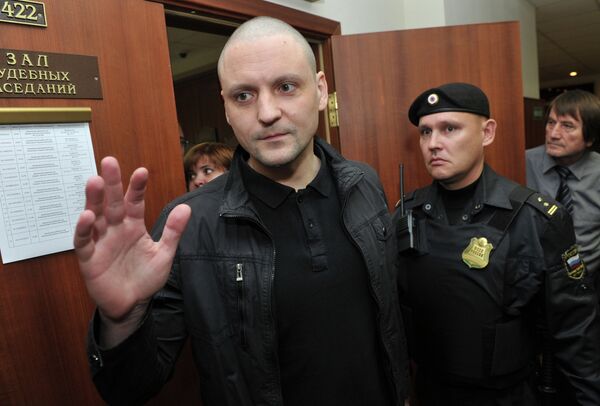 Sergei Udaltsov, leader of the Left Front, and Leonid Razvozzhayev, a member of the same opposition movement, have been charged with plotting to incite mass riots in Moscow on May 6, 2012 – the eve of Vladimir Putin’s inauguration to his third presidential term – when police clashed with protesters at a large-scale rally on the capital's Bolotnaya Square.

The Prosecutor’s Office is now expected to approve the charges and send the case to court.

The investigation into Udaltsov and Razvozzhayev was opened after the pro-Kremlin TV channel NTV aired footage last October that it claimed showed the two men and another Left Front activist meeting with a Georgian politician to plot the destabilization of Russia.

Razvozzhayev fled Russia soon after the show was aired, and has also been charged with illegally crossing the country's border with Ukraine to evade prosecution. When he reappeared in Russia, he claimed to have been abducted in Kiev by Russian security forces and tortured into confessing to the charges. He later retracted his confession.

Razvozzhayev has been in pretrial custody since his return to Russia from Ukraine. This month, a Moscow court ruled that he should remain in detention until at least February next year. Udaltsov has been under house arrest since February.

If tried and found guilty, the two men, who deny the charges and say the footage shown on NTV was fake, face up to 10 years in jail.

About a dozen other people are currently on trial over the violence that broke out at the Bolotnaya rally, which both protesters and the police accuse the other side of instigating.