‘White Shoelaces’ Gang Busted in Russia for Murder of Uzbek 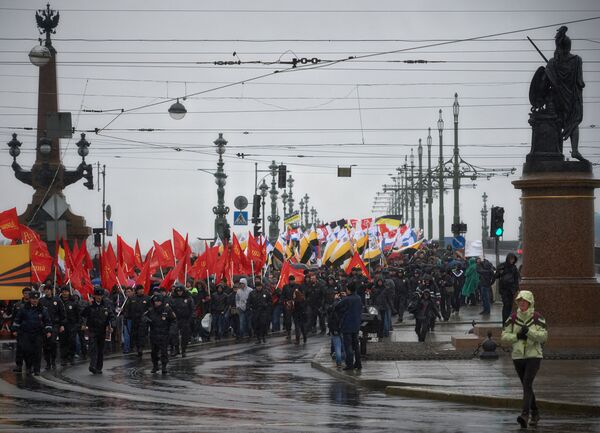 © RIA Novosti . Alexei Danichev
/
Go to the photo bank
Subscribe
Seven participants of this month’s nationalist Russian March have been arrested on suspicion of brutally murdering an Uzbek man in St. Petersburg after the rally, Russian investigators said.

ST. PETERSBURG/MOSCOW, November 23 (RIA Novosti) – Seven participants of this month’s nationalist Russian March have been arrested on suspicion of brutally murdering an Uzbek man in St. Petersburg after the rally, Russian investigators said.

Kosnikov – who had changed his first name to Andrei from Jemal – confessed to leading the vicious attack on the migrant, Fontanka.ru city news website said.

The 50-year-old Uzbek construction worker was stabbed and beaten to death on a street in the city’s southeast.

The gang members, who Fontanka.ru said identified themselves by the white shoelaces on their canvas shoes – a common symbol among skinhead groups – were returning from the Russian March, an annual gathering of the extreme right held across dozens of cities on November 4, investigators said.

About 1,000 nationalists rallied in St. Petersburg this year, according to organizers’ estimate.

Media said that a separate group of rally-goers beat up Asian-looking metro passengers in the city that night, a type of attack known as the “white carriage.”

The “white shoelaces” gang members are currently being investigated for murder, which could land the two over-18s among them in prison for up to 20 years.

Attacks and killings like the one attributed to the gang of youths were common in Russia and especially in St. Petersburg – Russia’s second city – in the mid-2000s, but police have cracked down on the skinhead gangs in recent years.