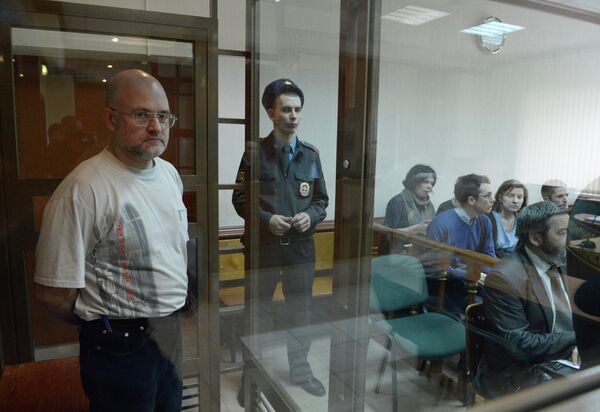 A Russian opposition activist on trial over mass riots at an anti-Kremlin rally ended his hunger strike after 65 days on Friday.

MOSCOW, November 23 (RIA Novosti) – A Russian opposition activist on trial over mass riots at an anti-Kremlin rally ended his hunger strike after 65 days on Friday.

Sergei Krivov agreed to give up the strike after meeting with members of the Kremlin rights council, said Yelizaveta “Dr. Liza” Glinka, a charity champion who sits on the council.

“[His] demands…weren’t discussed, it was a matter of a patient’s life,” Glinka said about the meeting.

The activist, who lost 20 kilograms during the strike, according to Ekho Moskvy radio, was protesting against being denied access to court documents.

Krivov was put in the medical ward of his pretrial detention facility in Moscow on Friday, a spokesman for the Federal Prison Service said.

Krivov, 51, reportedly fainted several times during hearings in recent weeks. A team of paramedics was called when he lost conscience in the courtroom Monday, but the judge banned them from examining Krivov.

The European Court of Human Rights requested earlier this week Russia to report on Krivov’s condition by next Wednesday.

Krivov, a sales manager and political activist, is on trial with 11 other opposition supporters over their role in the clashes with police during a protest rally on Moscow’s Bolotnaya Square in May 2012.

Investigators say rally organizers provoked the clashes, while protest leaders claim police mishandled the crowd by forcing it into a bottleneck.