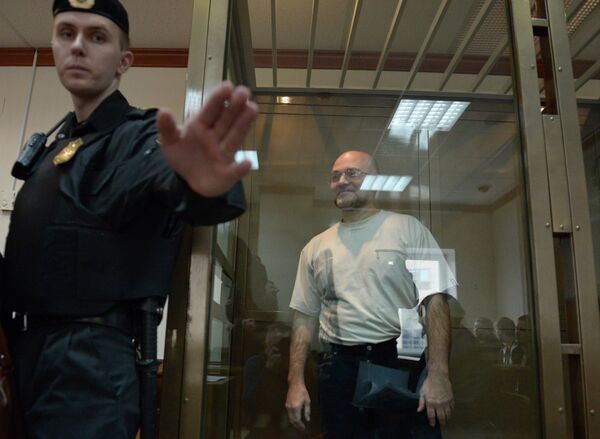 © RIA Novosti . Valery Melnikov
/
Go to the photo bank
Subscribe
The European Court of Human Rights has asked Russia to report on a suspect in the Bolotnaya Square rioting case who has been on hunger strike for 65 days.

MOSCOW, November 22 (RIA Novosti) – The European Court of Human Rights has asked Russia to report on a suspect in the Bolotnaya Square rioting case who has been on hunger strike for 65 days.

The Strasbourg-based court gave Russia until next Wednesday to report on Sergei Krivov’s condition, Krivov’s lawyer said in a blog post Friday.

An ambulance was called to a Moscow courtroom Monday when Krivov, 51, fainted. When paramedics arrived, the judge refused to let them examine the defendant, according to Slon.ru news website.

Krivov, a sales manager and political activist who has been in pretrial detention for 13 months, announced a hunger strike back in September in protest against being denied access to court documents.

He said earlier this week he was ready to end the strike, but would need a weeklong break from attending court hearings. The request was pending as of Friday.

Twelve people are currently on trial over last year’s clashes with police in downtown Moscow. The ECHR has merged complaints by seven of them – who do not include Krivov – into one priority case and sent questions to Russia earlier this month over the conditions of the activists’ detention.

About 650 protesters were briefly detained on Bolotnaya Square in May 2012 when an anti-Kremlin rally turned violent. Investigators said rally organizers had deliberately instigated the riots, while opposition leaders accuse police of provoking the clashes by forcing the crowd into a bottleneck.

Krivov faces up to 10 years in prison for assaulting police and participating in mass riots. He has pleaded not guilty and called the case a political fabrication.