Tajik Army Chief Sacked Ahead of US Afghan Pullout 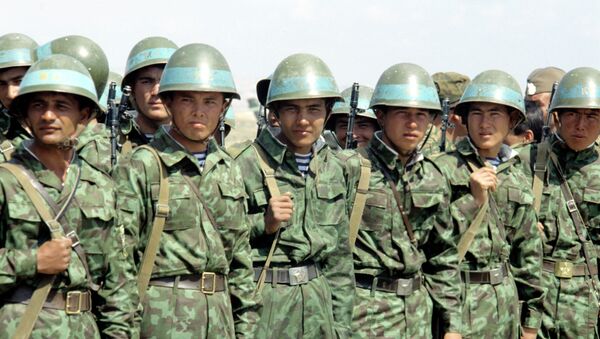 © RIA Novosti . Ratushenko
/
Go to the mediabank
Subscribe
International
India
Africa
The defense minister of Tajikistan, who has been in his job for 18 years, was dismissed Wednesday, months ahead of an expected rise in tensions in neighboring Afghanistan.

DUSHANBE, November 20 (RIA Novosti) – The defense minister of Tajikistan, who has been in his job for 18 years, was dismissed Wednesday, months ahead of an expected rise in tensions in neighboring Afghanistan.

Sherali Khairulloyev, 65, did not make the new government of recently re-elected President Emomali Rakhmon, the presidential press service said.
The post was given to Sherali Mirzo, 46, who has served as head of Tajikistan’s border guard service.

No reasons were given for the dismissal of Khairulloyev, who was appoint defense minister in 1995, while the ex-Soviet Central Asian nation was experiencing a bitter civil war.

Tajik authorities have routinely expressed worry over the upcoming pullout of the US-led coalition from Afghanistan next year, which governments in the region have said is likely to trigger a surge in Islamist activity.

Khairulloyev was known to be a supporter of Russian military presence in Tajikistan. Russia has a military base on the Tajik-Afghan border, and the Kremlin has ordered a boost in military support for the Tajik army ahead of the US pullout.

A leaked US State Department cable from 2006, however, describes a drink-fueled encounter between Khairulloyev and the then-US ambassador to Tajikistan in which the defense minister expressed the need to reach out to other military partners.

“[Khairulloyev] said he has come to understand Tajikistan must have a number of equal partners, not just one [Russia], if it is to prosper,” read the cable, obtained by Wikileaks.

The cable describes the US ambassador as struggling to duck out of the drinking session with Khairulloyev.

“The Minister insisted on showing him ‘secret rooms’ in the ministry. Each ‘secret room’ was merely another public conference room with a large fresh flower display and – again and again – another round of toasts set out,” the cable said.