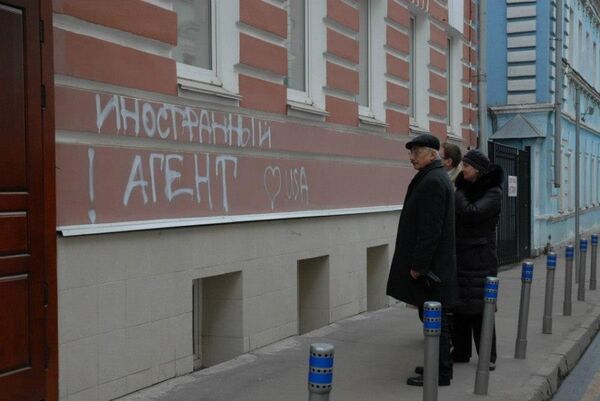 © Photo : Official website of human rights group Memorial
Subscribe
Human rights activists urged Russia on Thursday to repeal the controversial “foreign agent” law that has been disrupting the work of non-governmental organizations in the country since it came into force exactly a year ago.

MOSCOW, November 21 (RIA Novosti) – Human rights activists urged Russia on Thursday to repeal the controversial “foreign agent” law that has been disrupting the work of non-governmental organizations in the country since it came into force exactly a year ago.

The US-based Human Rights Watch organization issued a statement Thursday highlighting the negative impact of the law, which took effect on November 21, 2012 and obliges NGOs in Russia that receive foreign funding and whose activities are in any way “political” to register as “foreign agents” – a term associated in Russia with espionage.

The introduction of the law was widely seen as a Kremlin effort to put pressure on critics in human rights groups in Russia.

“For months now, they have been fighting through the courts. In some cases they are winning, but these are battles they shouldn’t have to face,” said Tatyana Lokshina, Russia program director at Human Rights Watch, in the statement.

Since the law was enacted, prosecutors have inspected over 1,000 NGOs across the country for their compliance with the new law, with dozens of them being ordered to register as foreign agents.

The rights group called on Russia to stop what Lokshina called an attempt to “silence certain government critics,” stressing that President Vladimir Putin himself had repeatedly promised to have the controversial law revised. The legislation remains unchanged as of today.

According to Human Rights Watch statistics, prosecutors lost nine of a total 14 court cases and won the other five, and the Justice Ministry suspended the activities of two branches of the election monitoring group Golos. At least three more organizations decided to halt their operations in connection with the law.

Russian authorities have maintained that the law was needed to limit the influence of foreign states inside the country.