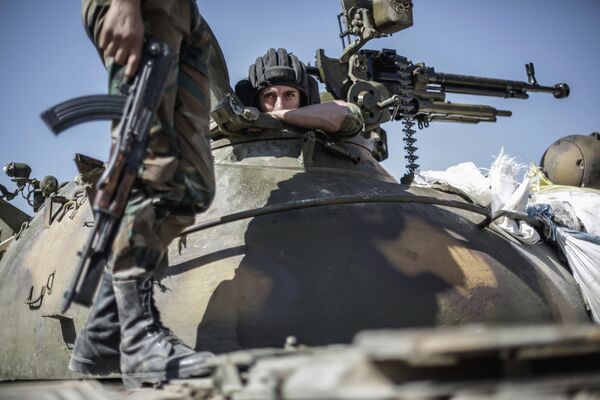 © RIA Novosti . Andrei Stenin
/
Go to the mediabank
Subscribe
International
India
Africa
Two men have been arrested in Russia on suspicion of running a team of mercenaries that were tricked into fighting on behalf of Syrian pro-government forces, state news television Rossiya-24 reported Wednesday.

MOSCOW, November 20 (RIA Novosti) – Two men have been arrested in Russia on suspicion of running a team of mercenaries that were tricked into fighting on behalf of Syrian pro-government forces, state news television Rossiya-24 reported Wednesday.

The Rossiya-24 report follows an investigation by St. Petersburg-based Fontanka.ru news website about the mercenary battalion, which reportedly comprised 267 troops and included Russian army and law enforcement veterans, as well as Cossacks.

Fontanka.ru reported that the recruits were told they would be making $4,000 per month for guarding power plants in war-torn Syria and that their mission had the Kremlin’s blessing.

Once they arrived in the Middle Eastern nation, however, they were made to serve in a private army of a strongman affiliated with President Bashar Assad, the website said in a report on November 14.

The battalion was equipped with 70-year-old anti-aircraft guns, mortar launchers dating back to 1943 and rusty T-62 tanks unfit for use, Fontanka.ru said, citing unnamed members of what has been dubbed the “Slavonic Corps.”

In October, the group was sent on a 500-kilometer raid into enemy territory, where it faced off against several thousand Syrian anti-government rebels, Fontanka.ru reported.

After several skirmishes, the Slavonic Corps retreated with eight injured and were saved only by a sandstorm that covered their tracks, according to the accounts of battalion members.

Battalion member Alexei Malyuta said he lost his documents during the retreat. The papers were later reportedly seized by rebels, who were the first to claim the presence of Russian mercenaries fighting for Assad.

The mercenaries left Syria without being paid and were then apprehended by Russia’s Federal Security Service after disembarking a flight to St. Petersburg.

Lower ranking members of the group were released after questioning, Fontanka.ru said.

The leadership of Slavonic Corps Limited Company, which is registered in Hong Kong, has been detained, the website's report said.

The Federal Security Services did not immediately respond to a faxed request for comment Wednesday evening.

Fontanka.ru said this was the first time in Russian history that anybody was to face similar charges.

A number of Russian Islamists, which some experts estimate may number in the hundreds, is believed to be fighting against Assad forces in Syria.

Moscow has lent its diplomatic support to the Syrian government and has confirmed supplying weapons to Assad since the outbreak of civil strife in 2011.

But Russia has never admitted to deploying any troops to fight in the Syrian conflict, which the UN estimates has cost more than 100,000 lives so far.