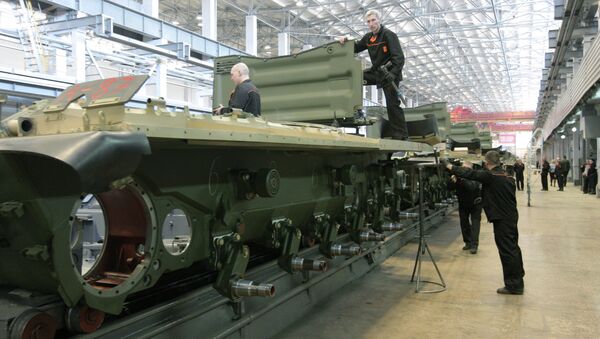 © Sputnik / Sergey Mamontov
/
Go to the photo bank
Subscribe
The development of Russia’s new-generation main battle tank will be completed in 2015, and mass production is slated to being in 2016, the tank maker said Wednesday.

MOSCOW, November 20 (RIA Novosti) – The development of Russia’s new-generation main battle tank will be completed in 2015, and mass production is slated to being in 2016, the tank maker said Wednesday.

Russia’s leadership has already seen a secret prototype of the new tank, dubbed the Armata and expected to become the armored core of the Russian army.

“We are moving to the next R&D stage of the project, to be finished in 2015,” said Vyacheslav Khalitov, deputy general director of the Urals-based Uralvagonzavod state-run corporation.

“The start of production in line with planned capacity is expected in 2016,” Khalitov said.

The official said three Armata prototypes were currently being tested, and production of the tank would start even before the end of the R&D work.

The Armata is designed as a modular universal combat platform that could be used as a basis for a variety of combat vehicles, including fire support, mine clearing, heavy flame throwing and bridge laying vehicles, according to Defense Ministry officials.

Although the new tank remains top-secret, Uralvagonzavod has said that its design incorporates elements seen in other projects, including Object 195 and Black Eagle.

It will also reportedly feature a remotely controlled gun and fully automated loading, as well as a separate crew compartment made from composite materials and protected by multilayered armor.

The Defense Ministry has said the Russian Ground Forces will get 2,300 Armatas by 2020.