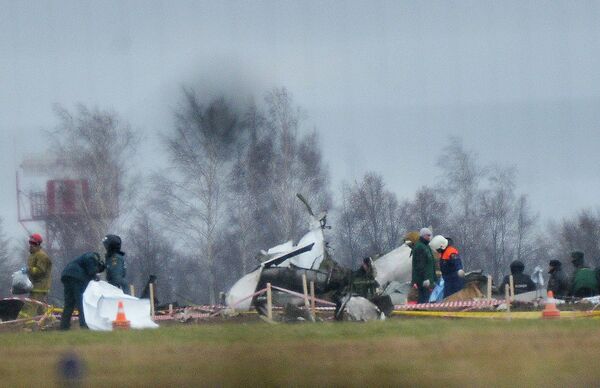 Russian officials said Monday that they have located flight recorders from a Boeing 737 that crashed in the city of Kazan over the weekend, killing all 50 people on board.

KAZAN, November 18 (RIA Novosti) – Russian officials said Monday that they have located flight recorders from a Boeing 737 that crashed in the city of Kazan over the weekend, killing all 50 people on board.

The Interstate Aviation Committee said in a statement that the container carrying the recorders was seriously damaged.

The recorders have been dispatched to Moscow and may begin yielding early and partial information by Tuesday, Transport Minister Maxim Sokolov said.

“Overall, for a full account of the causes, a long time will be needed,” Sokolov said.

Tatarstan Airlines, the flight’s operator, has taken its remaining Boeing 737 plane out of service until the causes of the crash are established, the company said in a statement Monday.

The plane was carrying 44 passengers and six crew from Moscow to Kazan when it crashed at Kazan Airport on Sunday at about 7:30 p.m. local time (1530 GMT).

The precise cause of the accident in the capital of Russia’s republic of Tatarstan is not yet known, but terrorism has been ruled out.

A video posted by various Russian media outlets Monday showed the plane plummeting directly downward into the ground and exploding into a fireball.

One British national, Donna Bull, a 53-year-old education consultant at Bellerbys College, a high school for foreign students in the UK city of Cambridge, was also among the dead.

“She was a very popular and well respected member of staff and will be sorely missed by both her students and colleagues,” Pitman said in a statement.

Crash investigators initially said the possible causes of the accident were a technical malfunction or pilot error.

The head of the transportation department of the regional Investigative Committee, Alexander Poltinin, said the pilot made two attempts at landing the aircraft for unknown reasons.

A Kazan International Airport air traffic controller, Kirill Kornishin, told state broadcaster Rossiya-24 that the pilot reported a problem with the “landing configuration” as he began attempting a second approach.

“He reported that he was performing another circle, and I dictated the data to him, according to procedure, and that was that,” Kornishin said.

Investigators have taken away for examination recordings of exchanges between air traffic control staff and the crew onboard the Tatarstan Airlines plane.

“Not all the bodies have been located,” Stepanov said. “The main work will be completed today.”

Stepanov said operations to comb through the wreckage would carry on into the week.

A source at the Federal Air Transport Agency told RIA Novosti that the plane last underwent a full servicing in March 2012.

The Tatarstan Airlines plane had previously been in service with a number of other international companies, including the Romania-based low-cost airline Blue Air from 2005 to 2008.

A pilot with Blue Air told RIA Novosti on condition of anonymity that the company had experienced no problems with the aircraft while it was used by the company.

Adds statement by Tatarstan Airlines on suspension of Boeing flights and a link to a video clip showing the crash.