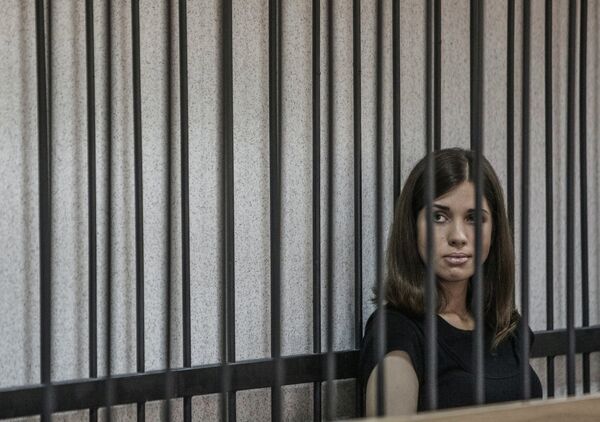 © RIA Novosti . Andrei Stenin
/
Go to the mediabank
Subscribe
International
India
Africa
A Krasnoyarsk court will begin hearing a request no sooner than January filed by jailed feminist punk group member Nadezhda Tolokonnikova to replace the remainder of her sentence with a lighter punishment, her lawyer told RIA Novosti on Monday.

KRASNOYARSK, November 18 (RAPSI) – A Krasnoyarsk court will begin hearing a request no sooner than January filed by jailed feminist punk group member Nadezhda Tolokonnikova to replace the remainder of her sentence with a lighter punishment, her lawyer told RIA Novosti on Monday.

The request was initially filed to a court in Mordovia, where Tolokonnikova was until recently serving a two-year sentence for her part in an anti-Kremlin protest in a Moscow cathedral last year. On November 14, the court ruled to forward the motion to the Krasnoyarsk Territory, where it was announced last week that Tolokonnikova had been transferred.

Lawyer Dmitry Dinze believes that the Zheleznodorozhny District Court in Krasnoyarsk will only receive the documents in a month. "At best, the court will begin considering the suit in January," he said. "We asked for imprisonment to be replaced with correctional labor or a fine.”

Tolokonnikova was one of three members of feminist art collective Pussy Riot who were sentenced last year to two years in jail for staging a brief “punk prayer” in Moscow's Christ the Savior Cathedral in February 2012.

Last week, the Federal Penitentiary Service (FSIN) announced that Tolokonnikova had been transferred from her prison colony in Mordovia to the Krasnoyarsk Territory, ending almost a month of speculation as to her whereabouts. The FSIN had said last month that Tolokonnikova would be moved to another prison after she staged two hunger strikes in protest against the conditions at the Mordovian colony and requested the initiation of a criminal case against its deputy warden, who she alleged had threatened her with murder. Investigators dismissed her request to open a case against Tolokonnikova and fellow Pussy Riot members Maria Alyokhina and Yekaterina Samutsevich were each sentenced in August 2012 by a Moscow court to two years in prison colonies for hooliganism motivated by religious hatred, charges the young women denied.

In October 2012, the Moscow City Court commuted Samutsevich's verdict to a suspended sentence. The sentences of Tolokonnikova, 24, and Alyokhina, 25, who both have young children, were upheld. They are due for release in March next year.