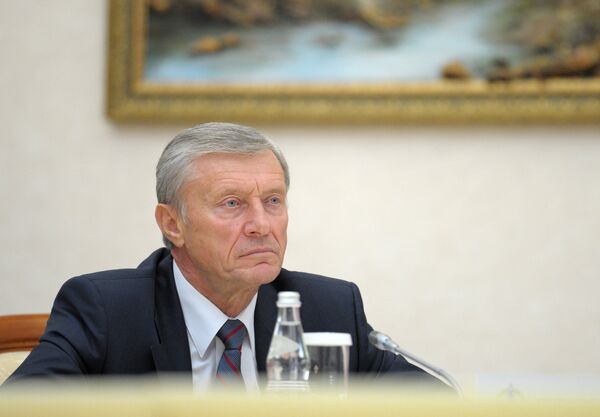 The head of the Moscow-led Collective Security Treaty Organization said Thursday that the military bloc should boost its peacekeeping capabilities in response to developing internal threats.

MOSCOW, November 14 (RIA Novosti) – The head of the Moscow-led Collective Security Treaty Organization said Thursday that the military bloc should boost its peacekeeping capabilities in response to developing internal threats.

CSTO general secretary Nikolai Bordyuzha said he saw a particular danger coming from countries on the geographic fringes of the bloc, a clear reference to Afghanistan.

“The need for an effective peacekeeping mechanism is dictated by the difficult international situation that has unfolded in many regions of the world, including areas not far from the CSTO’s area of responsibility,” Bordyuzha told a security conference in Moscow.

“The vicinity of a so-called arc of instability to our border creates a genuine danger,” he said.

He said potential threats were numerous and ranged from attacks by citizens of former Soviet states that had received terrorist training overseas to the proliferation of extremist ideas, weapons and ammunition in CSTO member states.

CSTO Joint Staff chief Alexander Studenikin said at the same conference that around 3,600 police, military and medical staff have been allocated to handling peacekeeping responsibilities within the organization. He said many of those selected for the job have undergone training abroad and have direct experience in peacekeeping work.

The CSTO, a body roughly analogous to NATO, currently has six members states, all of them former Soviet republics – Armenia, Belarus, Kazakhstan, Kyrgyzstan, Russia and Tajikistan.

The focus of the organization’s activities has consisted since its inception in the 1990s on fighting drug proliferation and counteracting terrorism risks.