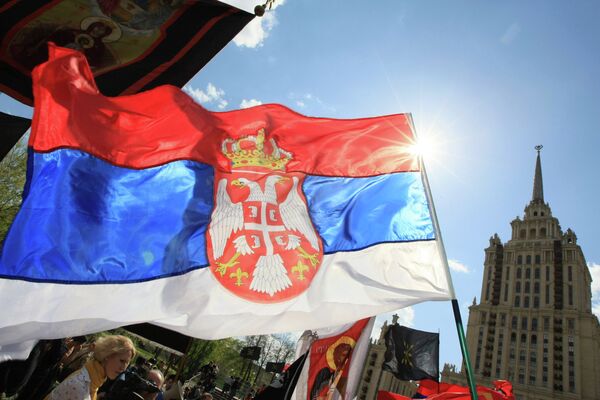 © RIA Novosti . Ruslan Krivobok
/
Go to the photo bank
Subscribe
Russia and Serbia signed an agreement Wednesday on military cooperation as part of further development of the strategic partnership between the two countries.

BELGRADE, November 13 (RIA Novosti) – Russia and Serbia signed an agreement Wednesday on military cooperation as part of further development of the strategic partnership between the two countries.

The deal was overseen in Belgrade by Russian Defense Minister Sergei Shoigu, whose visit is being seen as a prelude to a possibly imminent deal on the sale of Russian fighter jets to Serbia.

The agreements reached Wednesday included provisions, among other things, for collaboration in peacekeeping operations under the aegis of the United Nations.

Russia and Serbia have agreed to carry out joint military exercises and exchange visits of military personnel and hardware, including combat aircraft and aerobatics teams.

The main points of broader interest in the agreements hint at possible upcoming weapons purchases.

“Additional [military] agreements are being drafted, including an agreement on cooperation in defense industry and arms sales,” Shoigu said.

Serbian media reported in late April that the country hopes to buy a total of six MiG-29M/M2 fighters and two radar stations from Russia. It is believed the deal could be closed before the end of this year.