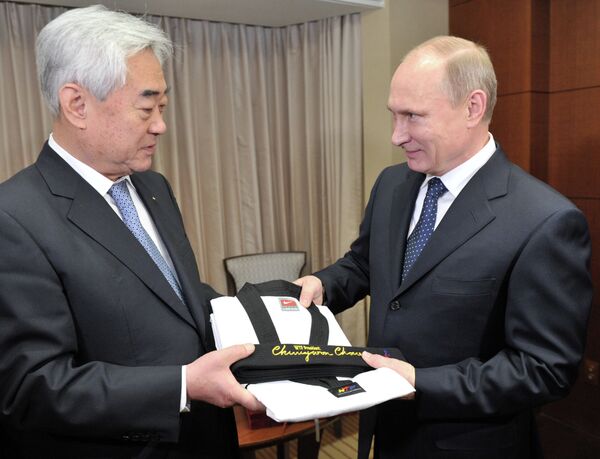 © RIA Novosti . Alexey Nikolsky
/
Go to the photo bank
Subscribe
Russian President Vladimir Putin was awarded honorary taekwondo grandmaster status Wednesday, making for an impressively immediate achievement in a sport he is not known to practice.

SEOUL/MOSCOW, November 13 (RIA Novosti) – Russian President Vladimir Putin was awarded honorary taekwondo grandmaster status Wednesday, making for an impressively immediate achievement in a sport he is not known to practice.

World Taekwondo Federation chief Choue Chung-won presented a black belt and a diploma signifying the much-coveted ninth Dan ranking to Putin during an official visit by the Russian leader to South Korea.

By way of comparison, famed US martial artist Chuck Norris, who sparred with Bruce Lee in the 1972 movie Way of the Dragon, holds an eighth Dan in taekwondo.

Although Putin does not do taekwondo, he does regularly practice judo, despite his 61 years. His work to promote the sport earned him an eighth Dan from the International Judo Federation a year ago.

A Dan is a level of proficiency on a scale that ranges from one to ten.

Putin, who was in the Korean capital, Seoul, to promote a pet project for a new Asian-European rail trade route, accepted the title modestly.

“I don’t think I have earned such a high Dan,” he said, promising that Russia would strive to contribute to the development of martial arts.

Putin was judo champion of his home town Leningrad, now St. Petersburg, in his youth and starred in the instructional video "Let's Learn Judo With Vladimir Putin" in 2008.

Judo and taekwondo are the only martial arts in the Olympic Games program. An estimated 70 to 80 million people practice taekwondo in over 200 countries around the globe.

Many world leaders and celebrities have been bestowed with honorary titles in martial arts, including US President Barack Obama, who received a taekwondo black belt from his then-South Korean counterpart Lee Myung-bak in 2009. Others recipients of the honor include the leaders of Pakistan, Indonesia, Honduras, Croatia and Spain.