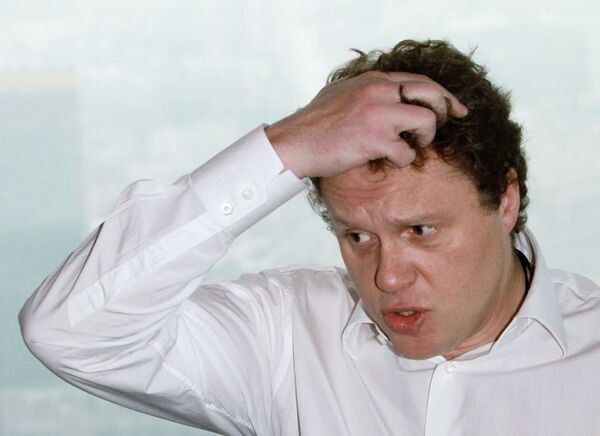 © RIA Novosti . Andrey Rudakov
/
Go to the photo bank
Subscribe
A Russian consular official in Cambodia said Tuesday that he has visited tycoon Sergei Polonsky in jail and that the conditions of his detention appear to be satisfactory.

BANGKOK, November 12 (RIA Novosti) – A Russian consular official in Cambodia said Tuesday that he has visited tycoon Sergei Polonsky in jail and that the conditions of his detention appear to be satisfactory.

Polonsky, who is wanted in Russia on embezzlement charges, was arrested this week on the island of Koh Rong off the west coast of Cambodia as he hid in the jungle. He is due to be extradited to Russia, a process his lawyer said Tuesday could take from five to seven days.

A spokesman for the Russian Interior Ministry said a Cambodian court is expected to rule Wednesday on Polonsky’s extradition to Russia.

The head of the consular section of the Russian Embassy in Cambodia, Pavel Seskanov, said Polonsky was being held in an Interior Ministry pre-trial detention facility in the capital, Phnom Penh.

“Polonsky made no complaints about the conditions of the detention,” Seskanov told RIA Novosti.

State-run Rossiya 24 television channel reported Monday that the 41-year-old tycoon had been taken to a police precinct in handcuffs, wearing only a beach towel. It took police several hours to find and arrest him, the report said.

The Cambodia Daily newspaper cited Paddy Robinson, manager of the Monkey Island resort on Koh Rong, as saying police reached the island by speedboat at around 7 a.m. local time Monday.

Robinson told the paper that police searched bungalows and the jungle in their hunt for the former real estate magnate.

“He was quite well liked on the island because he had a habit of buying a whole bar full of people drinks,” Robinson told the newspaper.

The Cambodia Daily cited a police official as saying another two foreign nationals and a Cambodian were detained for assisting Polonsky’s escape attempt.

An overnight search operation for Polonsky was launched after the disgraced former billionaire posted a video on Facebook purportedly showing a senior Cambodian police officer demanding $1 million for helping him to avoid extradition to Russia, Polonsky’s Russian lawyer said Monday.

Last week, Russia’s Prosecutor General’s Office said it had sent an official extradition request to Cambodia, where Polonsky had been living on his own island, near Koh Rong.

Cambodia granted him citizenship in September after judges there cleared him of liability in an alleged attack on several locals.

Once one of Russia’s richest businessmen, Polonsky has been charged in absentia in Russia with involvement in an alleged 5.7 billion ruble ($175 million) embezzlement scheme that targeted investors in an upscale residential project in Moscow.

Updated with the extradition hearing date.