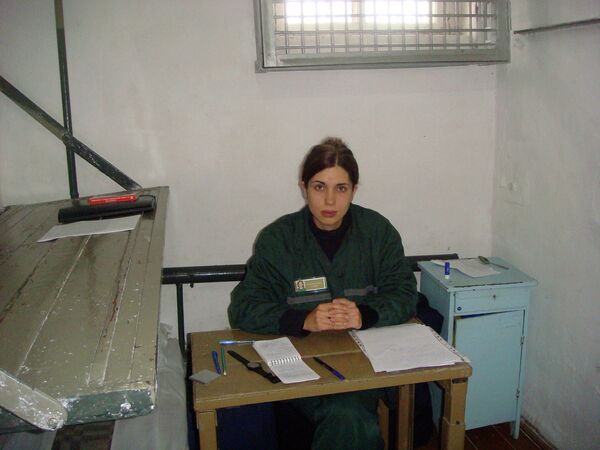 MOSCOW, November 12 (RIA Novosti) – Anti-Kremlin rocker Nadezhda Tolokonnikova has been transferred to a penal colony in her native Krasnoyarsk region due to her complaints about her previous facility, Russia’s human rights ombudsman said Tuesday.

The new prison was chosen to ensure Tolokonnikova’s safety and help her “resocialize” in a more comfortable environment, ombudsman Vladimir Lukin said in a statement, the first official confirmation of the jailed rocker’s location in three weeks.

Tolokonnikova, famous for staging a so-called prayer protest in a prominent Moscow cathedral with her all-female band Pussy Riot, was hospitalized last month after a nine-day hunger strike at a Mordovian prison where she said she endured horrific conditions.

She alleged that prisoners were working up to 17 hours a day for six or seven days a week, were deprived of access to toilets and bathing facilities, and were regularly beaten.

She also requested that a criminal case be opened against the prison’s deputy warden, who she said threatened to kill her.

Mordovia’s Investigative Committee had initially refused to open a case into the allegations.

Tolokonnikova, 24, and fellow Pussy Riot member Maria Alyokhina, 26, are due to be released in March 2014.