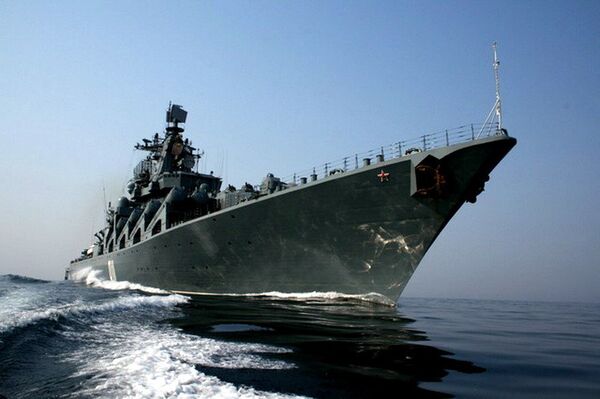 MOSCOW, November 11 (RIA Novosti) – The flagship of Russia’s Pacific Fleet, the Varyag missile cruiser, docked on Monday at the Mediterranean port of Alexandria, making it the first Russian warship to visit Egypt since 1992.

The Varyag’s arrival comes two days ahead of a visit by a Russian delegation led by Foreign Minister Sergei Lavrov and Defense Minister Sergei Shoigu to bolster military and political ties with Egypt.

During the six-day stay, the warship’s crew will exchange visits with local government and naval officials and take part in a series of cultural and sports events, said the Pacific Fleet’s spokesman, Capt. 1st Rank Roman Martov.

The Varyag, a Slava-class missile cruiser designed as a surface strike ship with anti-aircraft and anti-submarine capability, is currently part of Russia’s standing naval task force in the Mediterranean, which comprises some 10 warships from all four Russian fleets.

For Moscow, the improvement of ties with Egypt could signify a return in force to the Middle East while US diplomacy is failing all over the region.