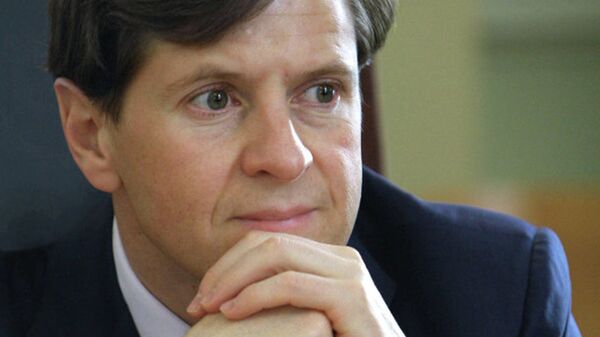 A fraud case had earlier been initiated against them. The Interior Ministry has said that Borodin and Akulinin from 2008 till 2011 organized the transfer of at least 50 billion rubles ($1.5 billion) from Bank of Moscow to accounts of affiliated commercial companies in Cyprus. Then they allegedly laundered the funds via affiliated non-resident companies registered in Cyprus.

According to investigators, the former bankers conducted illegal financial transactions in excess of 623 million rubles ($19 million).

In late 2010, Russia launched a criminal case against Borodin and Akulinin on charges of large-scale fraud involving state funds. They were accused of improperly loaning $443 million to shell companies, which then transferred the cash to Yelena Baturina, the wife of former Moscow Mayor Yury Luzhkov and the owner of the construction empire Inteco.

Borodin, whose Bank of Moscow functioned as the capital’s chief investment vehicle under Luzhkov, fled to Britain in 2011. In November 2011 the Russian Interpol bureau put Borodin and Akulinin on its international wanted list. In March 2013, Borodin was granted political asylum in Britain.

On May 27, 2013, the Swiss Attorney General’s Office launched a criminal case against Borodin and froze 354 million Swiss francs (about $370 million) in his Swiss bank accounts, and declared Bank of Moscow an injured party in the case. The bank now may file for damages, to be paid from Borodin's arrested funds. Similar lawsuits may also be filed against him in other countries. In August, property belonging to Borodin was seized in Latvia.