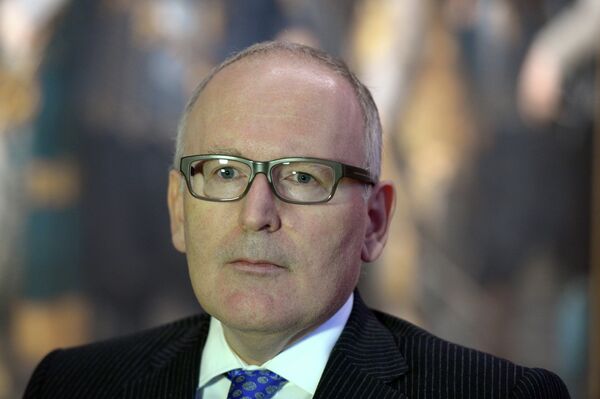 Gays are not being prosecuted in Russia, so they have no grounds to ask the Netherlands for asylum, the Dutch foreign minister has said.

MOSCOW, November 10 (RIA Novosti) - Gays are not being prosecuted in Russia, so they have no grounds to ask the Netherlands for asylum, the Dutch foreign minister has said.

Earlier some media distributed Foreign Minister Frans Timmermans’ statement in which he allegedly said that the Russian law banning homosexual propaganda among minors violates the rights of sexual minorities and may push Amsterdam to grant such people asylum.

“First of all, I’ve never said this,” Timmermans told RIA Novosti in an interview.

"I answered... parliamentary questions in the written form. And in my answer I said in general terms, it didn't pertain to Russia specifically, that if homosexuals are prosecuted, they are in a position to ask asylum in the Netherlands," he said.

"At this stage people who are homosexuals are not being prosecuted in Russia, so there is no ground for asylum in the Netherlands. It was a generic answer to a generic question; it was not specifically aimed at Russia," Timmermans said.

"Thank you for giving me the opportunity to clarify this, because I was very sorry that the impression was created that this was directed at Russia. It was not," he said.

Russia recently adopted an anti-gay propaganda law. The Kremlin maintains the legislation is aimed solely at protecting children and does not discriminate against homosexuals or prevent adults from making their own sexual choices. Critics insist the law has fueled a wider crackdown on homosexuality in Russian society.

Relations between Russia and the Netherlands have soured over a few issues recently, including the arrest of a Russian diplomat in The Hague and Russia's seizure of a Dutch-registered Greenpeace icebreaker.