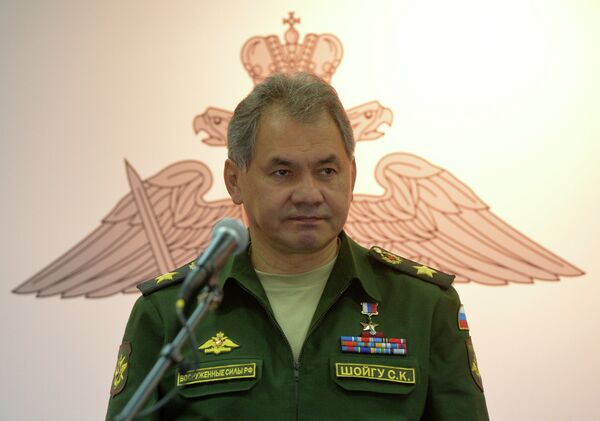 Speaking in an interview with Rossiya 1 television, Shoigu said international terrorism is Russia’s “main foe” as many militants fighting in “hot spots” around the world are members of terrorist organizations.

“It may sound stale and banal, but look who is really fighting in Syria? In Mali? In Libya?” Shoigu said.

Another major threat, in Shoigu’s opinion, is continuing attempts to build NATO infrastructure and expand the alliance’s presence close to Russian borders.

Russia has vociferously opposed bids by Georgia and Ukraine to become NATO members as well as plans to place elements of US missile defenses in Eastern European countries, such as Romania and Poland.

“This continuing [NATO] expansion, in our opinion, is completely unfounded,” Shoigu said. “We are talking and talking, and smiling to each other, but it’s still going on.”

Moscow also remains highly concerned about the persistent threat of terrorism and drug trafficking from Afghanistan, particularly after the withdrawal of the international military contingent from the war-torn Central Asian country in 2014, the minister said.

According to Russia’s federal drug control watchdog, heroin production in Afghanistan rose 40-fold in the past decade while Russia remains the main corridor for Afghan drug trafficking to Europe.

Shoigu said that a key purpose of the current military reform in the country is to make the Russian army a highly mobile and professional force capable of responding rapidly and efficiently to any security threat.

He said, however, that Russia will never have a fully professional army because it would be hard to maintain it.

“The territory of our country is too big to maintain a fully professional force, but we should be able to mobilize our resources in case of a threat,” the minister said.

Shoigu said earlier this week that 205,000 professional soldiers currently serve in the armed forces and their number will gradually increase in the next seven years.

The Defense Ministry has previously announced plans to reach a target of 425,000 professional soldiers, or almost half of the armed forces, by 2017, with an annual recruitment and retention of about 50,000 contract personnel.