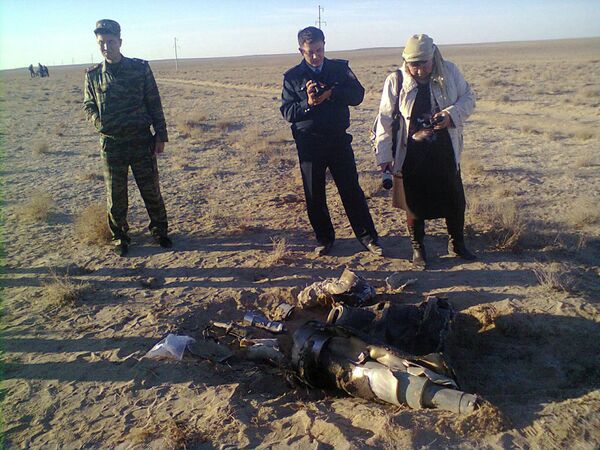 Debris of an unidentified spacecraft has been found in the Kyzylorda province in southern Kazakhstan where the Baikonur space center is located, the country’s Emergencies Ministry reported Wednesday.

ASTANA, November 6 (RIA Novosti) – Debris of an unidentified spacecraft has been found in the Kyzylorda province in southern Kazakhstan where the Baikonur space center is located, the country’s Emergencies Ministry reported Wednesday.

The debris, resembling wreckage, was found on Tuesday near the settlement of Kozhabaky.

Experts from the local sanitary service took water and soil samples from the site, the ministry said. The results of their analysis are expected to be ready in three days.

“According to a preliminary investigation, the radiation levels at the site are normal,” the ministry reported.

Some media outlets speculated that the debris might belong to a Dnepr launch vehicle that crashed in the area in 2006. Dnepr is a Russian RS-20 intercontinental ballistic missile (classified by NATO as the SS-18 Satan) converted into a carrier rocket to put satellites into low Earth orbit.

But Russia’s space agency, Roscosmos, has already announced that the debris could not belong to a Russian spacecraft because flight trajectories of Russian rockets do not pass over the region where the wreckage was found.

“Our rockets do not fly there,” Roscosmos spokesman Sergei Gorbunov said Wednesday.

Kazakhstan has repeatedly expressed concern about the environmental hazard from failed launches and debris fallout around Baikonur, which Russia rents for about $115 million per year in an agreement drawn up in the 1990s that is valid until 2050.