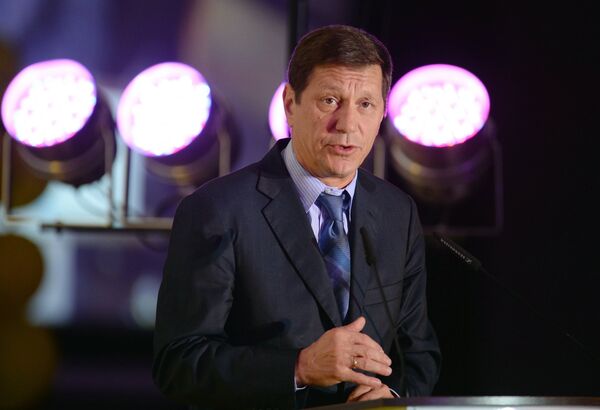 © RIA Novosti . Mikhail Mokrushin
/
Go to the photo bank
Subscribe
Russia has fulfilled the vows it made during the bidding process for the 2014 Winter Games, the country's Olympic chief Alexander Zhukov claimed Wednesday.

MOSCOW, November 6 (R-Sport) – Russia has fulfilled the vows it made during the bidding process for the 2014 Winter Games, the country's Olympic chief Alexander Zhukov claimed Wednesday.

Promising the most compact Games site ever, to be held in state-of-the-art venues, the Black Sea resort of Sochi beat out strong competition from Salzburg and Pyeongchang to win the rights stage Russia's first-ever Winter Olympics at a 2007 International Olympic Committee congress in Guatemala.

"I believe that we have satisfied these vows," Zhukov told RIA Novosti. He praised the six-arena coastal cluster of facilities built on lowlands on the Black Sea coast in the six years since.

"All the stadiums in the Imeritinskaya Valley are literally within walking distance of each other," he said, referring to the venues for all skating sports. "And in 40 minutes you can get to the Alpine skiing or ski jumping or biathlon competitions."

That is courtesy of a brand new high-speed rail link that connects the Olympic Park with the mountain cluster; the kind of infrastructure that was sorely lacking at previous Games such as Turin 2006, Zhukov said.

"In Turin you needed several hours to get into the mountains," he said. The country is also delivering on promises to make the Games the most innovative in history, Zhukov claimed.

"The entire communications system with broadcasting, the Internet, with telephony - with everything that concerns the most advanced technology - will be in Sochi," he said.

The Russian host broadcaster is deploying 12 multi-camera vans known as outside broadcast units for the Games to provide the most comprehensive HD coverage possible.

Zhukov's remarks come a little over a week after an Associated Press report claimed that the country had broken a pledge that it would refrain from dumping industrial waste when building the site. The report quoted environmentalists as saying local water supplies could be contaminated for years to come, but cited government officials as saying the situation was under control.

Prime Minister Dmitry Medvedev followed up by saying building work "is going on in strict adherence to ecological requirements."